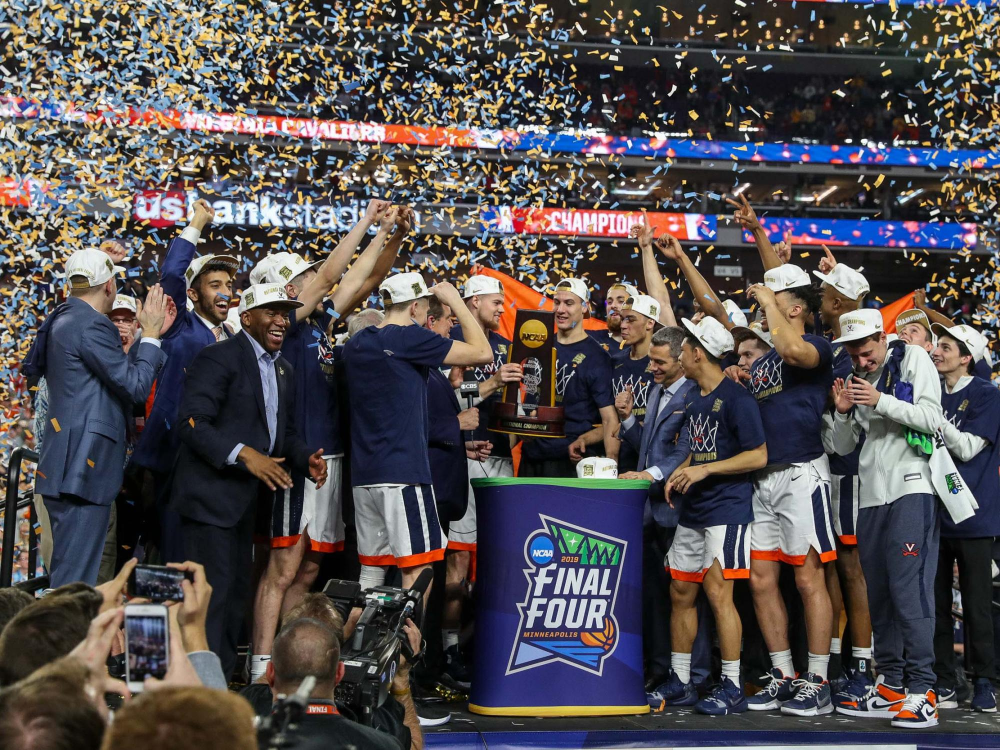 The College Basketball season is finally here! After the 2019-2020 season ended prematurely due to the outbreak of COVID-19, the sport is back and ready to (hopefully) have a full 2020-2021 season.

With the Gonzaga Bulldogs being ranked 1st in the pre-season AP Poll, it only makes sense to see them as the betting favorite as well. The Bulldogs undoubtedly would’ve been a number 1 seed in the 2020 March Madness tournament as they had a 31-2 overall record when the season was cancelled.

They’re in good shape to put together yet another dominant season with an arguably even better roster than they had last year. With two Naismith Player of the Year candidates in their starting lineup in Joel Ayayi and Corey Kispert, there’s no shortage of talent on the Bulldogs roster.

We’ll also get a feel for how they matchup against strong competition this season as they have a tough out of conference schedule including games against Kansas, Tennessee, Baylor, and Iowa before they start conference play.

With recent news that starter Tristan Clark has retired from the game of basketball, some people may question Baylor’s number two spot on the preseason poll. Despite Clark’s withdrawal from the season, this is a Bears team that could certainly make a run at the National Title.

The Bears’ strength for the upcoming season is their trio of guards in MaCio Teague, Jared Butler, and Donovan Mitchell. Head coach Scott Drew has truly turned Baylor into a college basketball powerhouse and as long as they stay healthy they should be in the hunt come March.

Number three in the AP Poll but number two on the odds list comes the Villanova Wildcats as they hunt for their third National Championship in the last five years.

The biggest strength for the Wildcats heading into this season is that every single one of their key players are returning except for Saddiq Bey who was drafted by the Detroit Pistons earlier this month.

While they took a small step back last year, finishing with a 24-7 overall record, all signs point to them improving on that mark this season with an experienced roster and one of the best coaches in College Basketball in Jay Wright. At +900, now might be the time to jump on the Villanova hype train.

The last team to win a National Championship, the Virginia Cavaliers, are ranked in the four spot heading into this season. While they may not play the most exciting style of basketball under head coach Tony Bennett (bet the unders!), it’s hard to argue against them making another deep run in March.

It is important to note that they did lose key rebounders Mamadi Diakite and Braxton Key, but they managed to grab Sam Hauser from Marquette who will give them much needed help from beyond the arc after ranking third-last in the 2019-2020 season in 3-point shooting.

If they can have another successful season in the always difficult ACC, you can almost guarantee they’ll be a top seed come March.

Iowa will go as far as their bonafide stud, Luka Garza, will take them. The 2020 Big Ten Player of the Year is the +300 favorite at FanDuel to win this season’s John R. Wooden Award which certainly means there are high expectations for Hawkeye’s center.

Iowa also has a great supporting cast around Garza including sophomore CJ Fredrick, and juniors Joe Wieskamp and Connor McCaffery.

Iowa has a few key out of conference games to start their season including UNC and Gonzaga. If they are able to handle those two teams, it might be time invest in their odds to win the National Championship.

Kansas, who was number 1 in both the AP Poll and Coaches Poll when the 2019-2020 season was cancelled, has dropped down to the six spot ahead of the new season. While you can almost guarantee that Kansas will have another fantastic season, as they usually do, losing Udoka Azubuike and Devon Dotson certainly hurts their National Title hopes.

Thankfully, they have one of the most versatile players in the nation in Marcus Garrett returning to their lineup, alongside Ochai Agaji and David McCormack. The continued development of sophomore Christian Braun will also be key to their 2021 success.

It won’t take long to find out how they’ll shape up against the top teams this season as they open their schedule against number one Gonzaga on November 26th.

It’s hard to find a team that’s in a better spot heading into the 2020-2021 season than the Wisconsin Badgers. After a late-season run secured them the number one seed in the Big 10 tournament before the season was cancelled, Wisconsin will be returning all five starters for the upcoming season including leading scorer Nate Reuvers.

The Badgers have also added 6’9 4-star recruit Ben Carlson who will bring some size to their power forward position.

Last season’s Big Ten Coach of the Year Greg Gard has to be ecstatic about his squads chances heading into this season. Wisconsin is one of the more enticing pre-season bets at +1800 as a fairly easy start to the schedule could mean their odds going nowhere but up as the season progresses.

It’s been a while since we’ve seen this much hype behind an Illinois team heading into the season. Both Ayo Dosunmu and Kofi Cockburn broke the hearts of Illini fans when they declared for the NBA Draft but they have since announced they will be returning for another year of school.

Not only did Dosunmu and Cockburn decide to return to school, but Illinois also added top-40 recruit Adam Miller.

The Fighting Illini boasts one of the deepest rosters in the Big 10 and could easily find themselves atop the standings come time for the conference tournament.

It’s a bit strange to see the Duke Blue Devils this low on the preseason rankings, but that could be due to some questions at center and power forward. Mike Kryzyzewski may have to implement a small-ball strategy for the 2020-2021 season but he has the talent to pull it off.

Despite losing Tre Jones, Duke will have the talented Jordan Goldwire alongside Wendell Moore Jr. and Matthew Hurt to lead them this season.

One interesting note for is that Duke will be without their massive home-court advantage as Cameron Indoor Stadium won’t be allowing fans to attend games this season.

While they have some question marks, it’s hard to bet against a Coach K led squad.

Despite being ranked tenth in the preseason AP Poll, the Kentucky Wildcats are sixth on the odds list at FanDuel at +1200. This is surprising as there’s a lot of new faces on the Wildcats including BJ Boston and Terrence Clarke.

Betting on Kentucky before the season starts will either seem very smart, or very dumb depending on how Boston and Clarke fare through the first couple months of the season. Staying away for now may be the best option as we’ve seen in the past that new starting lineups can take some time to gel and find their groove.

Keion Brooks is the only returning player that saw any kind of significant playing time last season, but he’s limping into the start of the 2020-2021 campaign and may not be 100%.

There are a lot of question marks for Kentucky heading into this season, but if you’re feeling risky an early bet may be the right move if Boston and Clarke can live up to their hype.