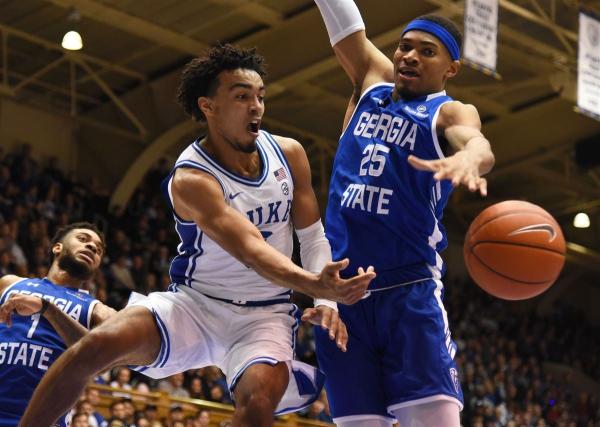 Saturday night features one of the best rivalries in college sports as the North Carolina Tar Heels (13-17) travel to Cameron Indoor Stadium to take on the No. 12 ranked Duke Blue Devils (24-6). In this ACC showdown and regular-season finale, Duke is looking to pull even with those atop the conference standings while North Carolina is looking to play spoiler.

At 14-5 in the ACC, Duke sits one game behind both Louisville and Florida State. Uncharacteristically, North Carolina sits almost at the bottom of the standings, as the Tar Heels are currently 6-13 in the conference, but they would still love nothing more than to play spoiler on the road. Tipoff for this one is scheduled for 6 pm ET.

For the North Carolina Tar Heels, they come into this one having won three in a row, including wins over Wake Forest (93-83), Syracuse (92-79) and North Carolina State (85-79). Prior to that, though, they had lost seven in a row, highlighting how inconsistent this season has been for the Tar Heels.

The last time these two played, North Carolina gave Duke everything they could handle as Duke won by just two points in overtime, and North Carolina will look to upset the ranked Blue Devils on the road.

Duke has hopes of a deep postseason run and will look to get on the right track with a win over North Carolina in their regular-season finale.

The Duke Blue Devils come into this one as 11.5-point favorites playing at home. The over/under for total points scored is set at 152.5.

On the offensive side, the Duke Blue Devils have been one of the best teams in college basketball this season. They currently rank 3rd in points per game as they are averaging 82.3 points (84.6 at home). For North Carolina, they come in 111th in the nation averaging 72.5 points per game (69.4 on the road).

North Carolina almost upset Duke at home, and while it will be tougher having to do it at a rowdy Cameron Indoor Stadium, the Tar Heels will be looking to get the job done on Saturday. The first matchup saw the game go in overtime with North Carolina falling by two.

It certainly wasn’t from a lack of effort from their stars, though, as both Cole Anthony and Garrison Brooks were solid. In the matchup, Anthony had a double-double with 24 points and 11 rebounds. Brooks had 18 points with five rebounds. Both will need to play well again Saturday for North Carolina to have a chance.

Bacot is questionable for this one with an ankle injury, though. On the flip side, Robinson didn’t play in the first matchup but is expected to in this one.

For Duke, the first time the two teams met, they got big games from several of their key players but none bigger than the play of guard Tre Jones. On the season, Jones is averaging 16.1 points, 4.3 rebounds, 6.2 assists and 1.8 steals per game. In their first matchup, he went off for 28 points, five rebounds and six assists.

Duke Wins, But Can They Cover?

I really think Duke will walk away with the victory in this one, but I have a hard time seeing them win it by 11.5 points. Yes, North Carolina has been rather pedestrian this game, but there is something about this rivalry where you can throw records out the window, and anything can go.

In the first matchup, Duke got big play from several key players (four players scored 17 or more points with two eclipsing the 20-point mark) and still only won by two. For my money, I am taking North Carolina in this one at +11.5.