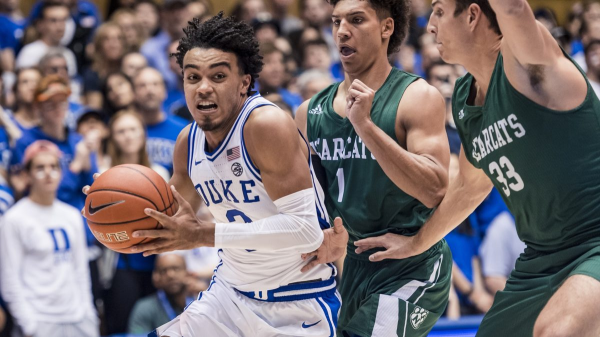 Tuesday night should be a lot of fun as the college basketball season finally gets started. One of the most exciting matchups of the night will feature the No. 3 Kansas Jayhawks taking on the No. 4 Duke Blue Devils at Madison Square Garden as part of the Champions Classic.

Both of these two teams have seen a lot of turnover from last season. Zion Williamson, RJ Barrett and Dedric Lawson have all moved on. Now both squads will look to new leaders to take them into the season, one that both Bill Self and Mike Krzyzewski will likely end with long journeys into the NCAA tournament. Tipoff for this one is scheduled for 7 pm ET.

In the matchup, the Kansas Jayhawks come in as two-point favorites playing at the neutral site. Interestingly, the line has swung, as the Jayhawks opened as 2.5-point underdogs but have now moved to the favorites. The over/under for this game is set at 152.5 points.

Mind you, these stats come with the huge disclaimer that these are completely different teams than last year. How different are they? Kansas lost its top two scorers from last year, while Duke lost four of its five top scorers. As a result, take these stats from last year with a grain of salt.

While Lawson might be gone from Kansas, that does not mean that it isn’t coming in with a talented team. The first player to take notice of is guard Devon Dotson. Last season, Dotson played in 36 games, averaging 12.3 points, 3.7 rebounds and 3.5 assists per game while shooting 48.2 percent from the field and 36.3 percent from the three. In what will be a pretty young Kansas team, Dotson will be looked at to be its floor general.

While Dotson should be solid, the most interesting player on Kansas this year will be center Udoka Azubuike. Last year, he was limited to just nine games due to a hand injury. Fast forward 10 months, and he is trying to make his return. In the time that he did play, Azubuike averaged 13.4 points and 6.8 rebounds while shooting 70.5 percent from the field. It is likely that he will have some rust to knock off, but if he looks completely healed, he could be a difference-maker not only in this game but all season long.

The Duke Blue Devils were one of the most dynamic, exciting teams we have seen in the college scene in a long time. No, they didn’t win the NCAA Tournament, but with players like Williamson and Barrett, they were certainly must-watch TV.

This year, the Blue Devils will have to adjust as those players have moved on. The returning starter from last season and floor general is Tre Jones. Last season, Jones averaged 9.4 points, 3.8 rebounds and 5.3 assists per game while shooting 41.4 percent from the field and 75.8 percent from the free-throw line. He will now be the veteran on the floor, and Krzyzewski will certainly look to him to increase his production this year.

In addition to Jones, it will notably be a solid recruiting class of freshmen around him on the floor. While this may not be a full slew of lottery draft picks, it is likely that many are first-rounders. Notably, after averaging 18.5 points per game in exhibitions, forward Matthew Hurt looks like the real deal. He won’t be the only freshman, though, as it is expected to be Jones and four other freshmen getting the starts Tuesday night.

Trying to analyze the outcome of the first game of the year between top-5 teams when both have had so much turnover and rely so heavily on freshman recruits can be daunting. Both teams have individual playmakers returning (Devon Dodson for Kansas, Tre Jones for Duke), but how they will mesh with the rest of the players around them will be important to Tuesday night’s outcome.

The wild card in this one could be Azubuike. If he seems game-ready, that could tip the scales to Kansas’ side; however, I still think the safe bet is with Duke. Last season’s 34-point thrashing of Kentucky to open the season shows that Krzyzewski usually has his team ready. Again, it could be anyone’s guess, so I wouldn’t blame you if you bet Kansas, but since I could very well see this one being close, I am taking Duke +2.