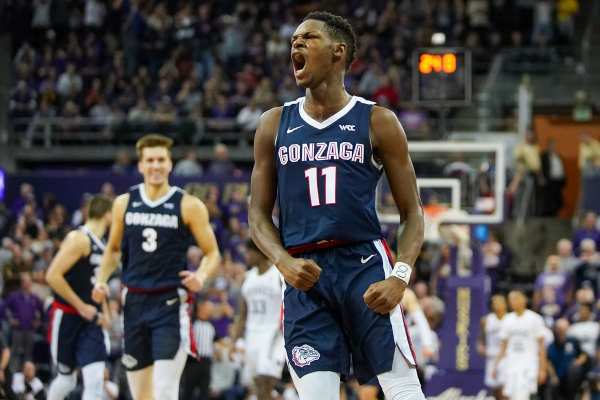 Wednesday night features a matchup of teams with big aspirations as the North Carolina Tar Heels (6-4) travel to take on the No. 2 Gonzaga Bulldogs (11-1). Despite the aspirations of both, only one team has played up to an elite standard thus far, and that is Gonzaga.

Still, Roy Williams will look to take his roster, despite significant injuries, and upset the highly ranked Bulldogs on their home floor. Tipoff for this one is scheduled for 9 pm ET.

It has been a dreadful stretch of basketball for North Carolina of late. How dreadful has it been? The Tar Heels have lost three in a row and four of their last five. To their credit, they did upset No. 8 Oregon a few weeks ago 78-74. However, since then, they were annihilated by No. 5 Ohio State 74-49, lost to No. 9 Virginia on the road 56-47, and were upset at home against Wofford 68-64 on Sunday.

To make matters worse, not only did they lose to Wofford on Sunday, but also an announcement came earlier in the day that star guard Cole Anthony would be out for the foreseeable future. That is a huge blow for an already struggling Tar Heels team.

While North Carolina has been struggling, the Bulldogs have been playing pretty good ball of late. They have won three in a row, including wins against Texas Southern, No. 22 Washington and No. 16 Arizona.

Their only loss came a few weeks ago at the hands of No. 14 Michigan. They will look to take advantage of a depleted North Carolina team to pick up another win on Wednesday.

Gonzaga comes into this game a massive favorite. The Bulldogs are listed at -13.

Losing Anthony for this one is a monumental loss for Williams and the Tar Heels. On the season, Anthony is averaging 19.1 points, 3.4 assists and 6.3 rebounds. While the Tar Heels have some pieces that can contribute, Anthony is certainly their primary scorer. While there is a sliver of a chance he could suit up, all indications are that he will be out for this one.

With the lone speed bump against Michigan, head coach Mark Few has the Gonzaga Bulldogs off to a hot start, and they have ascended to No. 2 in the rankings as a result. Despite the struggles of the Tar Heels lately, though, Few will have his team ready to go for a traditionally strong North Carolina team.

Leading the way for Gonzaga this season is sophomore forward Filip Petrusev, who is averaging 15.8 points and 8.4 rebounds per game. Junior forward Corey Kispert adds 14.1 points, 1.8 assists and 4.3 rebounds per game.

Even with Anthony, the Tar Heels were going to have a hard time keeping up with Gonzaga’s offense. Without him in the lineup Wednesday, it might be impossible. Gonzaga isn’t terrible on defense, but it is insanely deep and balanced on offense.

I see this one getting out of hand early, and the Bulldogs winning in a blowout. Obviously, keep an eye on the line in this one, but if it is within reason, I am all over Gonzaga to win and win big. Take the Bulldogs -13 at home over the Tar Heels.