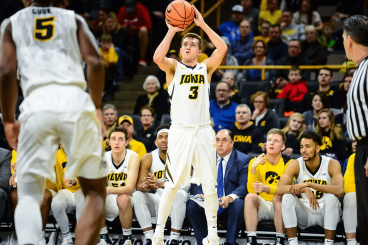 The Indiana Hoosiers are in Iowa City to take on the Hawkeyes in some rare Friday night Big Ten action. The Hoosiers are coming into this game off of a four-game winning streak with their last win coming over Michigan State, of course. Iowa is coming off of a tough home loss to Maryland that was a nail-biter throughout. Iowa has been a very solid team throughout the season while Indiana has been quite the opposite.

Indiana’s season has been a roller coaster but not the craziest roller coaster that twists and turns like crazy while going 100 MPH. Indiana’s season is like the tall roller coaster that is purely focused on the big fall. Going into a game vs. then #2 Michigan, Indiana was a 12-3 ranked team that looked to be on their way to the NCAA Tournament. Since then, they have lost 11 of 12 games and completely fallen off of the face of the college basketball universe. This is one of the craziest turns I have seen from a Power 5 team, especially since they did not have any real injuries that made them “fall off.”

The other thing that is notable is that they even had some good wins before this drop-off including a big win over Marquette and a win vs. Louisville. Just to add on to the odd happenings of the season, their only win in this streak was to Michigan State, a top 15 team in the country. All of this, again, happened without much turmoil on the court from a personnel standpoint. Throughout this stretch, Indiana has single-digit losses to Purdue (2), Ohio State (3), and Iowa (5). This shows that this Hoosier team isn’t quite playing as bad as their recent record might suggest.

Iowa has been much more consistent throughout the year. Their only losses have come to teams that were ranked at one point in time besides their loss to a solid Minnesota team. They also do have good wins over Oregon with Bol Bol and Michigan at home. This shows that Iowa does have some sort of upside when looking at them vs. a top tier team. Iowa is one of the few teams that has FIVE players average double figures. That is an incredible amount of balance, and it is a big reason for their success. The Hawkeyes always have players that are capable of keeping their team scoring when they may be in a bit of a drought.

When these two teams played recently, we saw good games from basically all of the stars, which is something that can rarely be said about 2 college basketball teams. Iowa had both Bohannon and Cook put in over 20 points to eventually carry Iowa to a 5-point road win at Indiana. Indiana’s two leading scorers both got theirs and scored over their season average, with Romeo Langford dropping 22 points on 7-12 shooting. The issue in this game for the Hoosiers was their bench production, but I think that will continue to haunt them all season. Iowa actually had multiple double-digit scorers score 5 or fewer points, and they still went on to win the game, which shows you their depth is very important.

I love trying to find interesting reasons why one side looks right over the other, and I think the depth of the Hawkeyes is drastically better than the Hoosiers. Not only the bench depth, but just the even distribution of scoring on the Iowa side of the ball is a situation I struggle to pass up vs. a team that lacks multiple scorers. Indiana’s second-leading scorer in that game shot 7-9, which is something that won’t continue. There is some trepidation on my part with the -7.5 line, but I will take the Hawkeyes here at home.