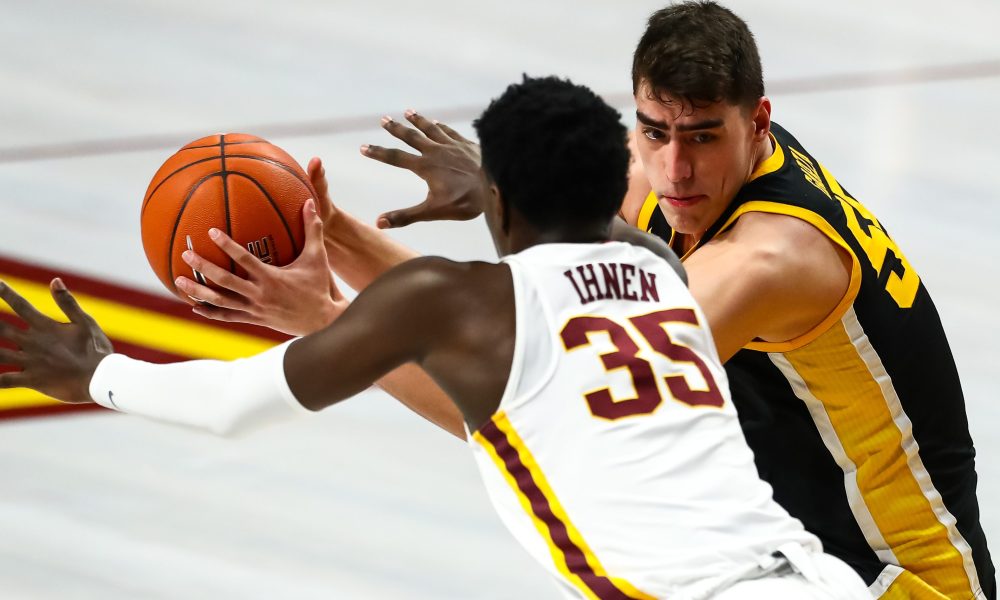 The 11-2 Iowa Hawkeyes are set to go head-to-head with the 10-3 Minnesota Golden Gophers this Sunday in what is guaranteed to be an intense battle. Not only does this top billing have to do with both teams being ranked in the top-25, but also due to the fact that they have already faced off this season.

That’s right! The two teams faced off on Christmas day in a battle that was eventually won by the Minnesota Gophers, 102-95. The win upset the top 5 ranked, Iowa Hawkeyes, who fell to 5th as a result Of the loss. It was also their 3rd loss of the season, which had to hurt given the fact that they had just lost to #1 Gonzaga only a brief time ago.

If nothing else, this is going to be a fun game to get some action on and might create insight into who could manage to go all the way in this year’s 62 team tournament. Beyond that, it will be a hot topic among betters, who have a lot to go on based on the previous game. What does all this data tell us though?

The Minnesota Golden Gophers are 3-2 in their last 5 matchups, which includes their win against the Hawkeyes. While that is their most important win to date and should help them get into the tournament, their 81-56 victory against Michigan State also gave them a huge boost. These efforts were led by Marcus Carr, Liam Robbins, and Both Gach, who all average a total of 10 PPG this season.

As for the Iowa Hawkeyes, they are 4-1 in their last 5 games, with their lone loss coming against Minnesota a few weeks ago. Although the loss was difficult to take due to the Hawkeyes being ranked higher, they did notch key wins against Rutgers, Michigan State and Purdue. They are also led by star center, Luka Garza, who averages 27 PPG and 8.9 rebounds as well.

When it comes to factors for Sunday’s game, look no further than their meeting on Christmas day. Not only is that where you will find that the Golden Gophers have a deeper bench, but also that Minnesota might have the better defense. If nothing else, their 102-98 victory proves that, and shows Iowa needs to move the ball around better.

Another sign that the Hawkeyes need to move the ball around more is the fact that Luka Garza carried the team with 32 points in 39 minutes This shows that Minnesota was able to neutralize Iowa’s better shooters and forced everything on Garza, which eventually spelled disaster for the #5 ranked team. Garza even led the team in rebounds with 17, but no one else even got close to that number.

In all honesty, the Iowa Hawkeyes need more depth in their bench and are going to need to find a way to pass the ball around. Garza might be a star Center, but he should not be carrying the team. Someone else on the team needs to step up and give him a break on shooting. Let him focus more on assists and rebounds, which will help the team amass more second-chance points.

This game is very much going to come down to lessons that each team learned in their earlier encounter. For the Iowa Hawkeyes, it is very much a game of moving the ball around. They need to find a way to get the work off Garza and put it on some of their bench players. As for the Golden Gophers, it’s going to be about their ability to neutralize the Hawkeyes again and make sure they don’t get key rebounds.

The Hawkeyes just have a problem when it comes to assists rebounds and steals, which again forces too much work on Garza. Now their star center might be an incredibly talented player, but he shouldn’t be tasked with carrying the team. That’s why it is going to be a team effort on Sunday and require the bench to put key points, assists, blocks, and rebounds.

In the end, gamblers need to be very wary of this one since it could end up going either way. For those that want to get in on the action though, put your money on the Gophers, who have proven themselves capable of knocking off the Hawkeyes in the past. It seems like the safe bet and could serve as a sweet little payday based on the odds.