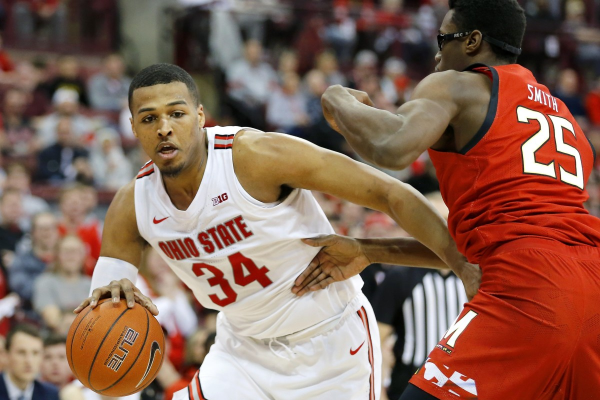 Sunday afternoon features a Big Ten showdown of Top 25 teams as the No. 19 Michigan Wolverines (18-10, 9-8) travel to the Value City Arena to take on the No. 23 Ohio State Buckeyes (19-9, 9-8). As both teams sit 3.5 games behind Maryland for the top of the Big Ten, this one is more about pride and postseason seeding as the regular-season Big Ten Conference title is out the window.

Michigan is also looking for redemption after being upset by the Buckeyes on their home floor, 61-58 back at the beginning of February. Regardless, both will be looking to get the win in this rivalry matchup. Tipoff for this one is scheduled for 4 pm ET.

For the Michigan Wolverines, their play has been a bit shaky as of late. They come into this one after having lost at home to unranked Wisconsin 81-74. Prior to that, they did have wins over unranked Purdue and Rutgers, but they weren’t exactly blowouts. They will look to get back on track as they travel to Ohio State.

The Buckeyes come into this one having won two in a row. Their last loss was an 85-76 road loss at No. 18 Iowa, but they have since beaten Nebraska (75-54) and got a big win over No. 9 Maryland 79-72. They will look to continue their solid play against the Wolverines on Sunday.

The Ohio State Buckeyes are a 3.5-point favorite playing at home. The over/under for total points scored is set at 137.

The Ohio State Buckeyes would love nothing more than to get another win over a ranked team, especially as the season winds down. To do so, they will rely on forward Kaleb Wesson to lead the way. He has led the team averaging 14 points, 9.6 rebounds, 2.1 assists and one block per game. In their first matchup with Michigan, he scored 23 points and had 12 rebounds.

One player they will be without is starting forward Kyle Young. On the season, he is averaging 7.5 points and 5.8 rebounds per game but has been ruled out with an ankle injury.

Michigan Looks To Exact Some Revenge

For the Michigan Wolverines, they will look to a trio of scorers to help lead the way to a victory. First, guard Zavier Simpson has been their leading scorer averaging 13 points, 4.4 rebounds, 7.9 assists and one steal per game. In their first matchup, he went for 15 points, seven rebounds and five assists.

In addition to Simpson, center Jon Teske and guard Franz Wagner have been solid. Teske is averaging 11.8 points, 7.1 rebounds and 1.9 blocks while Wagner is putting up 11.2 points per game with 5.6 rebounds and 1.2 steals.

Like Ohio State, they do have one injury concern as Eli Brooks has been dealing with a broken nose. The guard is averaging 11 points, 3.7 rebounds and two assists and is believed to possibly play in this one with a facemask.

Taking Michigan On The Road

For full disclosure, both of these teams are capable of taking control of this one and finding a win. Still, I think the better money is on Michigan. With starting forward Kyle Young being out for this one, it really limits the Ohio State offense.

In their last matchup, they relied on the outside shot. While that worked against a struggling Nebraska team, it may not be as effective against Michigan. Granted, Michigan has its own injury concerns with starting guard Eli Brooks having a broken nose, but the belief is he might play.

Ultimately, I don’t know if Michigan will get their revenge and pull off the win, but I think they will at least cover the 3.5 points.