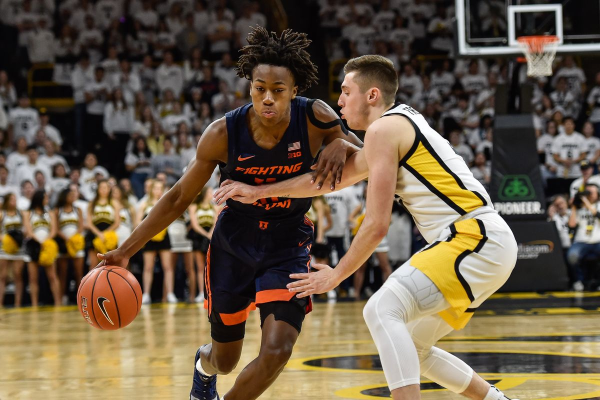 Friday night will see a battle of first-place teams in the Big Ten as the No. 9 Maryland Terrapins (18-4) travel to the State Farm Center to take on the No. 20 Illinois Fighting Illini (16-6). Both teams are 8-3 in conference play and tied atop the conference standings.

This will be a crucial win for the victor as they will hold the outright lead in the conference as well as generate a little bit of breathing room ahead of Michigan State, which is just a half-game behind both teams.

As March quickly approaches, this is a huge game for both the national rankings and for the race for the conference title. Tipoff for this one is scheduled for 8 pm ET.

The Terrapins come into this one having won five in a row, including a victory over No. 17 Iowa and Rutgers. Their last loss came back on Jan. 14 in a setback to Wisconsin on the road. In fact, all four of their losses this season have been on the road as they are just 2-4 away from College Park, Md.

Illinois is in the midst of a brutal, yet crucial, three-game stretch. After a loss to No. 17 Iowa on Sunday, the Illini play No. 9 Maryland and No. 16 Michigan State in two consecutive home games. If they can find a way to sweep both of these games, it will set them as the odds-on favorites to win the Big Ten.

Still, despite playing at home, where they are a superb 12-1, neither of these teams is going to make life easy for Illinois.

The Fighting Illini come into this one as three-point favorites playing at home. The over/under on total points scored is set at 133.5.

Despite being a much higher ranked team than Illinois, Maryland comes into this one as the underdog. It will look to shed that label and take over control of the Big Ten. To do so, the Terrapins will look to senior guard Anthony Cowan Jr. to continue his strong season (16.3 points, 3.7 rebounds, 4.3 assists).

Hoping To Bounce Back

The Illini play better at home, and they are hoping that continues to ring true both against Maryland and in their next game against Michigan State. What they are really going to need is sophomore guard Ayo Dosunmu and freshman center Kofi Cockburn to step up.

Taking Maryland And The Points

Neither of these teams is exactly an offensive juggernaut, but both play really good defense. Maryland, especially, can lock down opponents, which will come in handy in a tough road environment in Champaign.

Illinois has played well at home, and for Maryland to beat the Illini, it will have to be on the defensive end. Frankly, this one is kind of a coin flip for who wins as I think it will be close down to the wire. As a result, I am taking the team that is being spotted points. For my money, I am taking Maryland at +3.