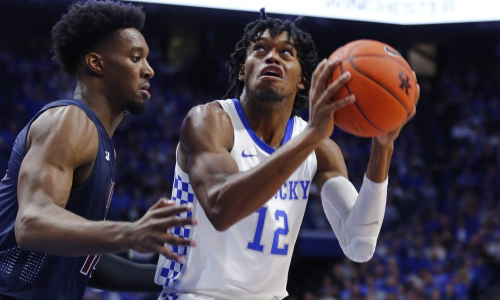 It’s another Champions Classic event, one of the most anticipated regular-season events in the college basketball calendar. The Kentucky Wildcats (1-1) will be meeting the Kansas Jayhawks (1-1) in a head-to-head in the college basketball competition on Tuesday night, December 1st. The match will take place in the Bankers Life Fieldhouse, Indianapolis, by 9:30 PM EST.

The Kentucky Wildcats and the Kansas Jayhawks both come into this game with a 1-1 record. So far from their all-time head to head meetings, Kansas is 9-23 against Kentucky, with the Jayhawks losing the last meeting on January 26, 2019, by 71-63.

The opening game of the Kentucky Wildcats against the Morehead State was a walk in the park as they won 81-45. However, their most recent game exposed their inexperience as they lost to the Richmond Spiders by 76-64 last Sunday.

The Wildcats had lost the sophomore forward, Keion Brooks Jr, to a leg injury, which will have him not featured in this fixture as he is expected to be out for 2-3 more weeks.

The Kansas Jayhawks Pecking Away at their Losses

In the opening game of the season, the Kansas Jayhawks were defeated by the number one placed team, Gonzaga. The match ended in a 102-90 final score as the Bulldogs made a mocker of the Kansas frontcourt by shooting an impressive 64.5 percent with a plus-nine rebounding edge. The Kansas Jayhawks came back from their loss to the Bulldogs as they defeated the Saint Joseph squad by a 94-72 scoreline last Friday.

Christain Braun leads the Jayhawks in scoring this season and is placed second on the team in rebounding (5.5 RPG). He was instrumental to the win against Saint Josephs, scoring 30 points to bring his average points per game to 19. Next in line is the junior forward, Ochai Agbaji, with 17.5 points per game. Ochai averaged 10.0 points, 4.2 boards, and 2.0 assists per game last season.

The leader of the Kansas Jayhawks, senior guard Marcus Garrett, is one of the best defensive players in the country. He had seven rebounds against Saint Joseph’s, has totaled five or more rebounds in 39 games.

The Jayhawks are still recovering from the loss of the big man Udoka Azubuike and point guard Devon Dutson but seem to be recovering just fine with the return of some key players. Christian Braun is currently leading the team with 19 points per night in two games, which is just ahead of Ochai Agbaji, who is at 17.5.

On the other hand, the Wildcats have freshman Brandon Boston Jr. as the team’s lead scorer at 15 points per game, along with three other players averaging at least 10 points per game. Meanwhile, new transfer Olivier Sarr had a 17-point, 11 rebound double-double in Sunday’s loss. The team also previously defeated the Morehead State squad with a final score of 81-45.

While both teams are not currently in excellent form, we would go with the favorite.

After extending their hot and San Diego’s cold streak, the Seattle Mariners will be looking to leave Petco Park with a two-game sweep as they take on the Padres this afternoon. Yesterday, the Mariners pounded out a dozen hits and plated eight runs, and Chris Flexen pitched 6.2 shutout innings to collect his third straight END_OF_DOCUMENT_TOKEN_TO_BE_REPLACED