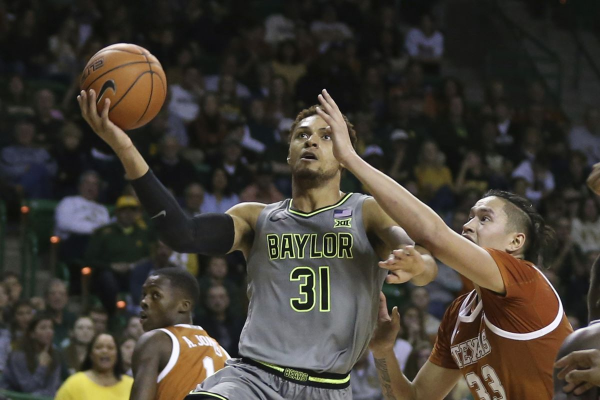 Saturday features a battle of not only two of the best teams in the country but also a possible Big 12 deciding matchup as the No. 3 Kansas Jayhawks (23-3, 12-1) travel to the Ferrell Center to take on the No. 1 Baylor Bears (24-1, 13-0). This is a rematch of a game from early January that saw Baylor go on the road to the Allen Fieldhouse to take down the Jayhawks, 67-55.

Kansas will be looking to repay the favor and move into a tie in the Big 12 if they can come away with a road upset. Tipoff for this one is scheduled for noon ET.

For the Kansas Jayhawks, they have been on a roll lately. They come into this one having won 11 straight games. In fact, their last loss was against Baylor.

Still, they are going to have their hands full beating a team that has been perfect at home this season and has been even more dominant than the Jayhawks.

For the Baylor Bears, they have just one blemish on their record. Their lone loss was a 67-64 loss to unranked Washington way back at the beginning of November.

Since then, they have won 23 games in a row, including a 65-54 win over Oklahoma on the road in their last matchup. They will look to keep the streak going as they welcome in the Jayhawks on Saturday.

The Baylor Bears come into this one as two-point favorites playing at home. The over/under for total points scored sits at 129.

On the defensive end is where Baylor really shines. They currently rank 3rd in the country in scoring defense as they are allowing just 58.2 points per game to opponents (56.2 at home). For Kansas, they come in just a few spots behind at 6th in the nation, allowing an average of 60.6 points per game (57 on the road).

Kansas Looks To Give Baylor Its Second Loss

Kansas knows they blew a golden opportunity the last time these two faced off, and you better believe they are hoping to take care of business Saturday. To do so, they will turn to sophomore guard Devon Dotson to lead them.

On the season, Dotson has averaged 18.4 points, 4.1 rebounds, 4.2 assists and 2.1 steals per game. As solid as those numbers have been, he was not impressive in their last game against the Bears. In that game, Dotson had just 9 points, one rebound and three assists in 28 minutes.

He has played well of late, though, as he went for 29 points in their last game against Iowa State.

Aside from Dotson, the other two main contributors are Udoka Azubuike and Ochai Agbaji. On the season, Azubuike has averaged 12.8 points, 9.8 rebounds and 2.6 blocks while Agbaji has averaged 10.3 points, 4.3 rebounds, 2.1 assists and 1.4 steals.

Once again, these two will need to perform better as they combined for just 12 points in their first matchup against Baylor.

While Butler has one of the best defenses in the country, they also have some potent offensive weapons. Sophomore guard Jared Butler and junior guard MaCio Teague have been phenomenal. On the season, Butler is averaging 15.6 points, 2.8 rebounds, three assists and 1.6 steals per game.

For Teague, he is averaging 14.4 points, five rebounds, two assists and one steal. As good as they have been this year, they were even better in their first matchup with Kansas. The two guards combined for 38 points, 11 rebounds and six assists in that matchup.

Highlighting how well Baylor played in the first matchup, both of these players also scored in double digits as Gillespie had 13 points and Mitchell had 10. They will look for big outings from the four players again on Saturday.

Taking Kansas And The Points

There are a few factors that come into play for me in this one. First, Baylor’s offense played above their norm in the first matchup between the two back in early January. This is not to say they aren’t talented, but Kansas did not play the level of defense that they had been accustomed to in this one.

Additionally, Kansas has been on an absolute roll lately. Obviously, so has Baylor, but Kansas has been playing much better in the last few weeks than the team that showed up against Baylor the first time. I still think it is 50-50 on who actually comes out victorious in this one, but I do like Kansas and the two points given that I think it could be so close.