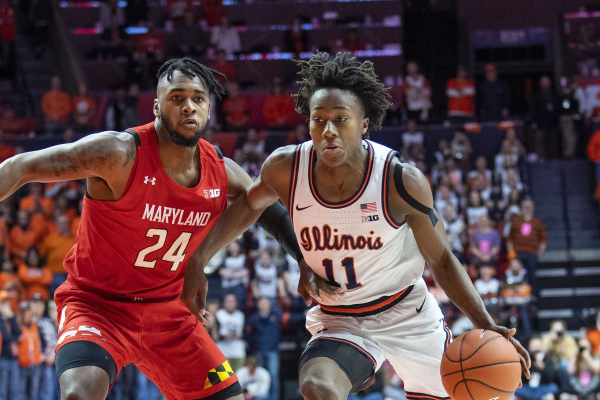 This is a huge matchup for the Big Ten tournament seeding. While Illinois sits in 4th in the conference standings and Iowa is tied for 5th, there could be a lot of fluctuation when it is all said and done. For instance, Illinois sits just one game behind Maryland and Michigan State, who each have a conference record of 13-6 heading into Sunday’s play.

Iowa, along with two other teams (Penn State and Ohio State), sits just one game behind Illinois. Thus, the outcome of this one could have huge ramifications for seeding. Tipoff for this one is scheduled for 7 pm ET.

For the Iowa Hawkeyes, they have played a bit inconsistently having gone 2-2 in their last four games. With that being said, one of their losses was to No. 16 Michigan State (78-70), but the other was a 77-68 loss to unranked Purdue at home. Iowa has already beaten the Illini once this season as they beat them 72-65 at home back at the beginning of February. They will look for the season sweep Sunday.

For the Illinois Fighting Illini, they come into this one having won four of their last five. The lone loss in that time was in their last game, losing 71-63 to the No. 19 Ohio State Buckeyes.

The Fighting Illini come into this one as 3.5-point favorites playing at home. The over/under for total points scored is set at 146.

On the defensive side, it is Illinois who holds the advantage. They rank 45th in the nation in scoring defense. They are allowing opponents to score just 64.9 points per game (62.1 at home). For Iowa, they come in ranked 240th on defense, allowing an average of 72.1 points per game (76.7 on the road).

The Iowa Hawkeyes were able to take care of business against the Illini back in February and will look to do the same on the road in the regular-season finale. To do so, they will likely look to lean on big man Luka Garza again.

On the season, Garza is averaging 23.7 points, 9.9 rebounds and 1.8 blocks per game. He was right on point in their first matchup against Illinois as he scored 25 points with 10 rebounds. He will look to have another big night Sunday.

For Illinois to win this game, they are going to have to do it on the defensive end and with solid play from guard Ayo Dosunmu. On the season, Dosunmu is their leading scorer averaging 16.6 points, 4.2 rebounds and 3.2 assists, but in their first matchup, he scored just 11 points with one rebound and three assists.

Since that game, though, he has been on a roll scoring 16 points or higher in the last seven contests, including a 21-point, five-rebound, five-assist game against the Buckeyes in their last matchup.

Taking Iowa And The Points

I have really gone back and forth on this one. I like Illinois in this one straight up, but I think it will probably be close down the stretch, and there is no guarantee Illinois can pull it off. Illinois’ offense is going to have to step up to keep pace with Iowa’s offense, and Ayo Dosunmu is the key.

If he can continue his hot streak, the Illini have a good shot. Still, I see this one coming down to the end and could be a one-possession game. For my money, I am taking the Hawkeyes and the 3.5 points.