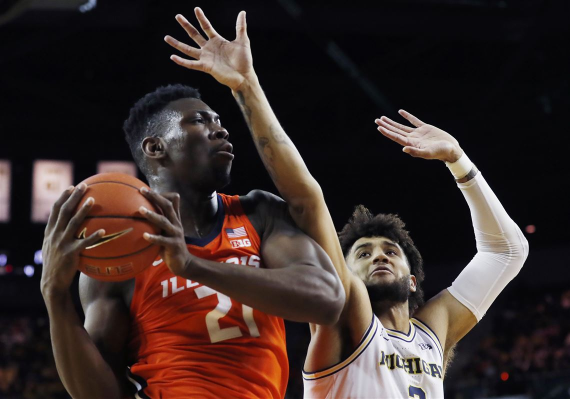 Iowa currently sits in fifth in the Big Ten, as it has struggled to the tune of four losses in the conference. Illinois sits atop the Big Ten standings, as it currently has a half-game lead over Michigan State.

This is going to be a big matchup for both sides, not only in the conference but for national rankings, too. Tipoff for this one is scheduled for 1 pm ET.

The Fighting Illini have had a pretty solid season to this point, Even in their losses, they have played solid as they have really only been blown out of one game, a 76-56 loss to No. 14 Michigan State.

Still, with that loss, the Illini need every conference win they can get to fend off the Spartans and hold onto the conference lead. This also starts a really tough stretch for them, as they face five Top 25 teams in a row (No. 18 Iowa, No. 15 Maryland, No. 14 Michigan State, No. 25 Rutgers and No. 24 Penn State). A win over Iowa would be a great start to such a tough stretch.

The Hawkeyes have also had a great start to the season, although they have been inconsistent against conference foes as four of their six losses come against the conference. Still, they have played well and had won five in a row until they were beaten in their last game, an 82-72 loss at Maryland.

They will look to bounce back and start a new winning streak on Sunday against the Illini.

The Hawkeyes come into this one as five-point favorites playing at home. The over/under on total points scored is set at 146.

Illinois has had a fantastic season thus far and has Illini fans buzzing in a way that many haven’t seen since the 2005 team that made it to the National Championship game. Still, the Illini will be facing a true test over the next couple of weeks, and a win against a very talented Iowa team would be a great start.

Coach Brad Underwood will look to his two leading scorers, sophomore guard Ayo Dosunmu and freshman center Kofi Cockburn, to lead the way. On the season, Dosunmu is averaging 16 points, 3.4 assists and 4.2 rebounds per game, while Cockburn is registering 14.4 points and 9.4 rebounds per game.

At 10-1, the Hawkeyes have been dominant at home, and it is no wonder given how they can attack you from several angles on the offensive side. Their main weapon is big man Luka Garza, an absolute matchup nightmare for most teams.

On the season, Garza is averaging 23 points and 10.4 rebounds per game. He has recorded a double-double in two of his last three games.

Sophomore guard Joe Wieskamp has also been lethal, as he has been averaging 15 points, 6.2 rebounds and 1.9 assists per game. In his last 10 games, he has scored in double-digits in all of them and has exceeded 20 four times in that span.

Taking Illinois And The Points

This should be a really interesting matchup, and I am excited to see how the matchup of Kofi Cockburn and Luka Garza plays out. If one of those two gets in foul trouble, the edge will easily go to the other side.

Still, the Illini are going to need big games from their starters and will need to use their solid defense to slow down Iowa. It wouldn’t shock me if Iowa ultimately wins this one, but I like the point spread for Illinois. I think they have the momentum (a seven-game winning streak) and the players to keep this one close. For my money, I am taking Illinois at +5.