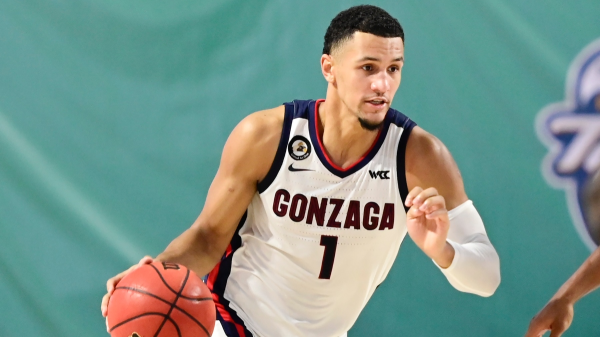 In a rare top-two meeting in the NCAA, the Gonzaga Bulldogs will square off against the Baylor Bears in a game that is sure to excite nationwide fans of college basketball.

This game comes after a fantastic first week of a college basketball season that was punctuated, in equal measure, by surprising upsets, great wins, and a few cancelations as a result of the ongoing pandemic.

Both these high-flying teams are coming off victories, with the Bulldogs managing a scrappy 87-82 win against the No.11 West Virginia Mountaineers on Wednesday in Indianapolis. This was a much tougher test for the boys from Washington, as, before that, they’d managed a combined winning margin of 35 points against their first two opponents: No.7 Kansas and Auburn.

However, it wasn’t to be a blowout fur Gonzaga, as the Bulldogs had to overcome the Mountaineers’ rugged defense and sheer domination at the glass. In the end, the Bulldogs managed to fight through a sluggish start to the game as well as a left-foot injury scare to the talented freshman, Jalen Scruggs, as they outscored their opponents by 53-43 in a resurgent second-half performance.

On the other hand, Baylor had to overcome a slew of distractions – including the contraction of COVID-19 by team coach Scott Drew- as they opened the season with a 112-82 blowout win in Las Vegas over Louisiana-Lafayette. Carrying that momentum, the Bears proceeded to pull off another 86-52 blowout against the Washington Huskies.

Ahead of Wednesday’s game against No. 5 Illinois, the Bears’ coach Scott Drew returned and guided his team to yet another impressive win: an 82-69 thumping.

This means that the Bears have set themselves up to clinch the No. 1 ranking from Zags with a win come Saturday.

With the way things have shaped up, college basketball fans will watch a game that might end up being a preview to the Final Four and, incidentally, will be played in the same city.

It will be a neutral-court game with the Indianapolis Bankers Life Fieldhouse as the venue. The game is slated for 1 p.m. ET on December 5. As expected, there will be no fans allowed at the game, per the previously stipulated COVID-19 precautions.

This game was supposed to have already taken place, but the pandemic’s harsh effects led both teams’ coaches in Scott Drew (Baylor) and Mark Few (Gonzaga) to schedule the game this late in the year.

Going into Saturday, both squads are padded with bonafide college basketball stars. The Bears have point guards Macio Teague (who is currently averaging 15.7 points, shooting 47.5% from the field) and Jared Butler ( who, himself, is averaging 16.3 points per game with 48.8% from the field).

Zags has plenty of ammunition themselves in forwards Corey Kispert and Drew Timme. These players are averaging north of 20 points per game: with Kispert at 22.3 and Timme at 23.3.

From the odds table, Gonzaga is the prohibitive favorite. Despite their slight fall off in the last game, the oddsmakers are still convinced that Zags will dominate the game come Saturday with their notorious squad depth and incredible shooting from range.