Duke Looking to Prove They Are Elite Against Illinois 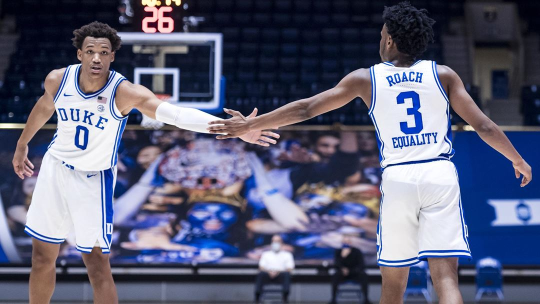 Duke is still Duke but they have not been very impressive this season. They opened with a win against Coppin State, then lost at home to Michigan State and beat Bellarmine, a school that most didn’t know existed. All three of those games have been ATS losses though. Maybe this group is not good enough, or focused enough to beat a team by more than 30, but losing at home, even to a program like MSU was unexpected.

Illinois Want to Prove Something

Illinois looks like they have their best team since coach Brad Underwood took over thanks to guard Ayo Dosunmo, who could have been playing in the NBA this season, and a couple of other players on the roster who might have that in their future. The Illini hung with Baylor for a half last week, then kind of fell apart in the second half. That likely means they are second or third tier this season, which is probably where Duke is too, making this a really fun matchup. Like Michigan State they are hoping to go into Cameron Indoor Stadium and come out with a win. Also like the Spartans, they are good enough to do so.

Duke has talent, but they do not have a player like Dosunmo, and they are going to be challenged to handle big man Kofi Cockburn in the middle. Last season, he would been a perfect counter to Vernon Carey, now in the NBA. This year they are going to have a hard time matching up with his bulk. Matthew Hurt has length and leads the Blue Devils in scoring but he is a shooter, not a guy who is looking to mix it up inside.

Duke has been making 35% of its three pointers and if they are going to be an elite team they are going to have to increase that number. F Jalen Johnson vs. G Adam Miller is a nice matchup of productive freshman, a matchup that Miller can win, certainly in scoring. If he does I don’t see how the Illini don’t get the game as well. Duke has already shown that Cameron Indoor just isn’t the same without the Crazies.

Duke has under-performed this season so it is not surprising that they have yet to hit an over too. Illinois has been the opposite going 3-1 O/U thus far. In this one I like a correlated total with the spread. By that I am mean, if Illinois is going to be really competitive I think they are going to want to play at a slower pace. I like their talent but I am not sure they can compete with Duke shot for shot. Their best approach is to go a little slower and with really high usage from their best players Cockburn and Dosunmo. The result they are looking for might come from those guys taking half the shots. Dosunmo is not always the most efficient but he is a big time shot maker. He can make the big ones even as this comes in Under.