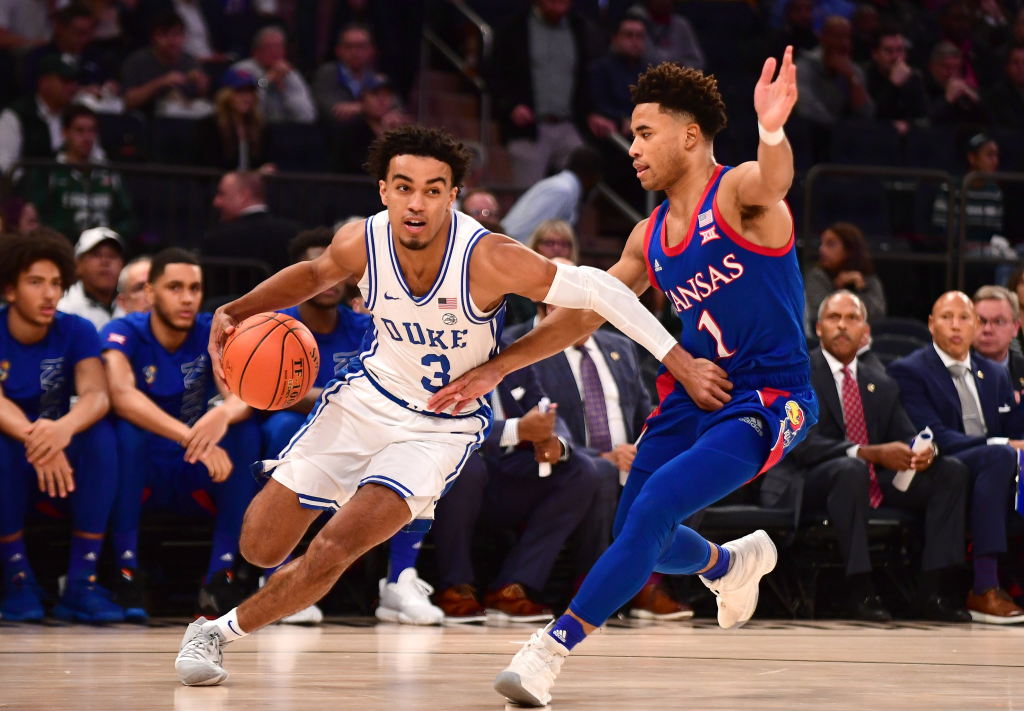 When you think of elite college basketball programs, two that will come to mind the quickest are Duke and Kentucky. The Wildcats have won eight national championships, and the Blue Devils have won five. Most years, the two programs are expected to be among the favorites for the title.

It’s still early, but it does not appear that either team is destined to cut down the nets this season. Kentucky won their opener against Morehead State, but they have dropped four in a row since. Against Notre Dame on Saturday, they trailed by as many as 24 in the first half and by 22 at halftime before making a spirited comeback in the second half to draw within one in the final seconds. However, their last-second shot was off the mark, and the Fighting Irish left Rupp Arena with a 64-63 win.

Things haven’t been nearly as dire for Duke, but after being ranked in the top ten early on, the Blue Devils have fallen out of the top 20 thanks to two ugly home losses to Big Ten foes. Against Michigan State in the Champions Classic, Duke led by double digits early but ended up finding themselves down by as many as 16 in the second half in a 75-69 loss. Then against Illinois in the ACC/Big Ten Challenge last Tuesday, the Blue Devils never led and never made a serious second-half run in an 83-68 loss.

COVID-19 has had a big effect on college basketball schedules around the country. But it hasn’t had an effect on the rankings, with Gonzaga and Baylor remaining at the top of the rankings despite both teams dealing with COVID-related pauses.

Those two teams also remain the leading favorites to win the national championship, according to the latest college basketball futures. The Bulldogs, who started 3-0 before halting activities, are +450 to win their first-ever national title, with the Bears at +800. Villanova, aiming to win a third national title in six seasons, is at +900. Iowa, who has averaged 100.5 points in their 6-0 start, is at +1000 heading into Saturday’s scheduled showdown with Gonzaga.

That’s a list that contains a few of college basketball’s historic powers, which reflects the changing parity in the sport, the storylines of this unique season, and how the likes of Duke and Kentucky are currently performing.

Fellow historic power North Carolina, who needed a strong finish to put away North Carolina Central on Saturday, sits at +2300 after a 4-2 start. That is marginally ahead of Duke and Kentucky, who both sit at +2500 along with Florida State and Indiana. All in all, 20 teams currently sit at +2500 or better odds, which shows just how wide open this season’s NCAA tournament could be. That list includes Richmond, who beat Kentucky in Lexington last month, but it does not include 5-0 Missouri, who still sits at +8500 despite beating a ranked Oregon team a couple of weeks ago and top-ten Illinois last weekend.

While the non-conference play has not been very kind to Duke and Kentucky, they are both still expected to contend for the title in their respective conferences, and the latest odds reflect that.

The ACC is set to be a wide-open race, with no standout favorite as of yet. Florida State edged out Duke, Louisville, and Virginia by a game to win the regular-season title last season, and the Seminoles, who have started 3-0 this season, are up there at +320 to repeat despite losing NBA Draft lottery picks Patrick Williams and Devin Vassell. The slight favorite, however, is North Carolina at +300. Behind the Tar Heels and Seminoles sit Virginia (+350) and Duke (+400). Undefeated Clemson sits at +1000, with fellow undefeated team Louisville at +1200 and Virginia Tech at +1400.

In the SEC, Tennessee has the edge over the rest of the field at +140. Kentucky, despite their rough start, is still only +380 to win the SEC title. LSU, who took home the conference title two seasons ago, is at +500 to win it this season. Florida, who is dealing with the devastation of seeing star forward Keyontae Johnson’s collapse in Sunday’s loss to Florida State, is currently at +650. Arkansas, who has rolled to a 6-0 start against a soft non-conference schedule, is at +900. So is Missouri, who will get an early test of their SEC title credentials when they face Tennessee and Arkansas in their first two conference games in a couple of weeks.

All odds in this article are courtesy of FanDuel Sportsbook.

After extending their hot and San Diego’s cold streak, the Seattle Mariners will be looking to leave Petco Park with a two-game sweep as they take on the Padres this afternoon. Yesterday, the Mariners pounded out a dozen hits and plated eight runs, and Chris Flexen pitched 6.2 shutout innings to collect his third straight END_OF_DOCUMENT_TOKEN_TO_BE_REPLACED