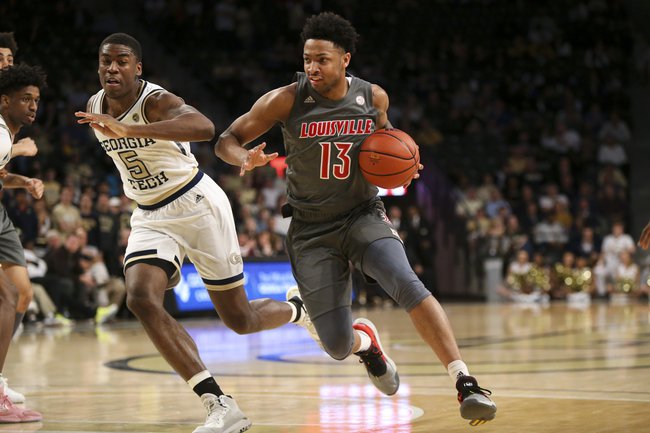 There are only three ranked teams in College Basketball action on Monday. Two of them face-off in the Big 12 as the league tries to sort itself out behind Baylor. The Red Raiders are hosting the Sooners in what should be a very competitive game, the last time they met it was decided by just 2 points. The other match featuring a top team has Louisville hosting Georgia Tech. That one has an early start though, a great chance to catch some hoops on a coffee break this afternoon.

Mondays are relatively quiet but this one has a strong showing from the Missouri Valley. Drake is in action and still undefeated after a scare, and Loyola-Chicago still thinks they should be considered the best team in the league. They might be right even though they have taken a few losses already.

Georgia Tech had one of the best wins over the weekend as they cooled off Florida State. The win was impressive, but like all of their other quality wins this year, it came at home. They have only won once on the road and a trip to the YUM Center is hardly an easy one. Louisville has to be a bit ornery after being held to just 50 points in their last game, a loss to Clemson.

The Cardinals have lost three of four and might not deserve that #25 next to their name. Scoring only 50 against a top defensive team like Clemson is not totally unexpected. However, it did once again reveal how thin this team is this season. There is not a ton after Carliq Jones. Just enough to bounce back and get this win.

This one opened at -4.5 and has already moved so depending on who you like you may need to time it right. Oklahoma is playing great right now. They have recent wins over Kansas, Texas, and Alabama, all ranked teams. They are not clobbering opponents but they have shown they can play with pretty much anyone.

Texas Tech is off a nice win over LSU in the B12/SEC Challenge. They have been competing well and with a few bounces going their way maybe they would be the hot team. Texas Tech did win at Oklahoma last month in a game played in the 60s, the way they like it. As the spread moves, I like the home side less and less though because their preferred style of play can let teams hang around. Oklahoma has been great in close games this season.

Drake is undefeated, but this season it is hard to know just how good they are because they have not played anyone of consequence outside the Missouri Valley. Still, they are an amazing 13-1 ATS for the year with that one loss being in their most recent game, also against Illinois State. Somehow the Redbirds took flight and forced Drake to overtime before losing by 2 points, making for an easy cover.

The result has dropped this line a couple of points as these teams meet for the second day in a row. What was that saying about lightning striking twice? Drake likely bounces back and shows the team that has been killing opponents and spreads all season long.

You can still make a solid argument that Loyola-Chicago is the top team in the MVC. There are still familiar faces from that Final Four run a couple of years back and they are hot right now with seven straight wins, covering in all of them except for one push.

Like the game above these teams also met just yesterday and Loyola dominated, winning by 26. Even if they just win by half of that it will be an easy cover. I don’t see the Bears figuring it out on a short turnaround, especially with the Ramblers peaking at the moment. They are trying to make the MVC a two-bid league this season.

After extending their hot and San Diego’s cold streak, the Seattle Mariners will be looking to leave Petco Park with a two-game sweep as they take on the Padres this afternoon. Yesterday, the Mariners pounded out a dozen hits and plated eight runs, and Chris Flexen pitched 6.2 shutout innings to collect his third straight END_OF_DOCUMENT_TOKEN_TO_BE_REPLACED