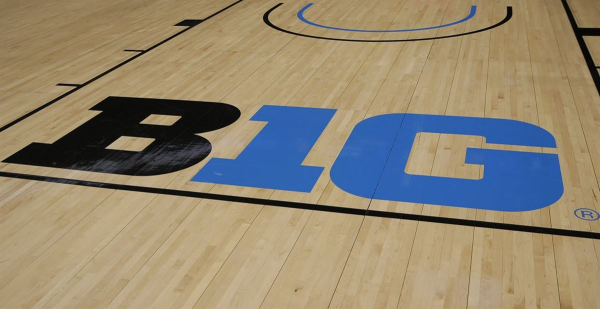 The 2020-21 college basketball season is only a few weeks old, but it has not been short on excitement so far. That is even with COVID-19 greatly affecting schedules around the country both before the season and since it started. Several notable non-conference tournaments were either scrapped or amended, while last weekend saw the highly-anticipated matchup between #1 Gonzaga and #2 Baylor be called off hours before tip-off.

Still, there has been plenty to see in the first few weeks of action, and college basketball futures odds are beginning to take shape as we head into the final few weeks of 2020.

The Big Ten has not had a member win a national championship since Michigan State in 2000, but a trio of Big Ten teams are among the early favorites for the national title this season.

Gonzaga (+500) is the national title favorite, with Baylor (+800) and Villanova (+900) next in line. But Iowa (+1100), Illinois (+1300), and Michigan State (+1500) are all up there, and each has an impressive win on their resume already. The 5-0 Hawkeyes came away with a 93-80 win over North Carolina Tuesday night, taking a big early lead and dominating down the stretch after the Tar Heels had come back to take the lead midway through the second half.

4-1 Illinois fell to Baylor last week, but the Illini showed their immense potential Tuesday in a dominant 83-68 win at Duke. Illinois took a double-digit lead only four minutes into the game, and eight points are the closest the Blue Devils would get the rest of the way.

Michigan State’s 5-0 start includes an impressive Champions Classic win over Duke. The Spartans were set to have a big test at fellow title hopeful Virginia (+2000) on Wednesday, but the game was called off due to the Cavaliers facing COVID issues.

Gonzaga’s Timme A National Player of the Year Candidate?

With an expanded role this season, big man Drew Timme was expected to be a key piece of the Bulldogs’ run at a national title. But if the sophomore continues to play as he has so far, some individual accolades could be coming his way in addition to team success.

Timme, who averaged 9.8 points and 5.4 rebounds last season as a freshman, opened this season by posting 25 points and six rebounds to help lead the Zags past Kansas. He followed that up with a huge 28-point, 10-rebound showing against Auburn, and after starting slowly against West Virginia, finished with 17 points in an 87-82 win over the 11th-ranked Mountaineers.

Iowa’s Luka Garza (-150) is the clear favorite for the Wooden Award, and he has lived up to the preseason hype by averaging 29.5 points, 10.8 rebounds, and three blocks per game. Illinois star Ayo Dosunmu (+480) has shown his credentials early, averaging 22.6 points, 8.2 rebounds, and six assists. But Timme has jumped to +600, with those three the only players currently with odds shorter than +1000.

Highly touted Oklahoma State freshman Cade Cunningham is at +1200, and he has more than met lofty expectations by posting a 20.6 ppg/5.6 rpg/4.0 apg stat line in the Cowboys’ 5-0 start. Oklahoma State is ineligible for the NCAA Tournament this season due to a postseason ban, so it will be interesting to see if that affects his candidacy and his odds as the season progresses. It is worth noting that Timme’s teammate Corey Kispert only sits at +2000 at present, despite averaging 22.3 points and five rebounds so far.

All odds in this article are courtesy of FanDuelSportsbook.