Big Ten Up For Grabs Heading Into Weekend 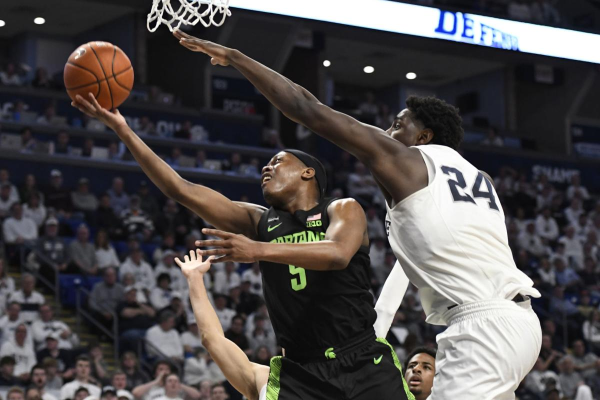 The eccentricity of this college basketball season is perfectly exemplified by the Michigan State Spartans.

Michigan State began the year as the top-ranked team in the nation, but would quickly begin slipping down the rankings due to losses against Kentucky, Virginia Tech, and Duke.

Then came the month-long stretch when the Spartans were no better than mediocre. Including a 71-42 loss to Purdue, Michigan State lost six out of 10 games and fell to a record of 17-9, giving them a slim chance at claiming the Big Ten title.

The Spartans then ripped off three straight wins against Nebraska, No. 18 Iowa, and No. 9 Maryland, who could have already claimed the Big Ten regular-season title if recent results were reversed.

Even after Michigan State’s winning streak, it was all falling apart against No. 20 Penn State on Tuesday when the Nittany Lions racked up a 19-point lead in the first half. After hitting 10 three-pointers in the first half, Penn State missed 13 without a make in the second half.

The Spartans took advantage, going on a 24-3 run immediately after halftime. Led by Xavier Tillman’s 23-point, 15-rebound performance, No. 16 Michigan State earned an eight-point victory and now finds itself just one win away from the Big Ten regular-season title.

With a win over Rutgers Tuesday night, the No. 9 Maryland Terrapins would have improved to 14-5 in the conference and led the way in the Big Ten. Instead, Rutgers earned the 11-point victory and allowed Michigan State to pull itself level at the top of the conference standings at 13-6.

Now, the Big Ten regular-season title is up for grabs over the weekend, when the Spartans will take on No. 19 Ohio State while the Terrapins go head to head with No. 25 Michigan.

When it boasted an overall record of 22-4, Maryland was supposed to wrap up the Big Ten regular-season title with five games remaining. Then, the Terrapins lost three of the next four, handing them their current record of 23-7 and a tie atop the conference standings.

Now, both Maryland and 21-9 Michigan State are one win away from at least a share of the Big Ten regular-season title.

Then there’s No. 24 Wisconsin, which can find itself in the same position with a win over unranked Northwestern on Wednesday.

And No. 23 Illinois is the fourth team with a shot at a share of the regular-season title, but it will need wins over No. 19 Ohio State and No. 18 Iowa to reach a conference record of 14-6, the tally likely needed to claim the title.

Big Ten Crowded at the Top

A wild season that’s included a wild finish for Maryland has resulted in a very tight race atop the Big Ten standings.

Let’s go by conference record, of which 13-6 Maryland and Michigan State hold the lead heading into the final game of the regular season. Those two squads are closely followed by Illinois and Wisconsin, who both own a record of 12-6.

At the close of the regular season, we could easily end up with four Big Ten teams sitting on conference records of 14-6 as we head into the conference tournament.

As we crawl closer and closer to the NCAA Tournament, it’s Maryland that holds the best odds of any Big Ten team of winning it all. With odds of +1800, the Terrapins are tied for the seventh-best odds in the country.

While Kansas (+650), Gonzaga (+900), and Baylor (+1000) are the current favorites of winning the NCAA Tournament, the Big Ten should be well represented in March Madness.