Zion vs. RJ Takes Over the NBA Summer League 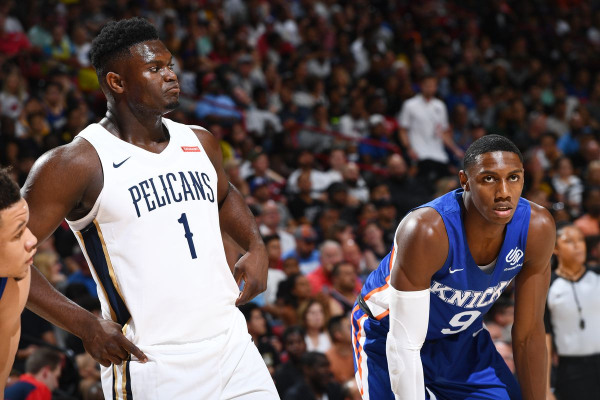 Cut short by an earthquake, the Summer League Showdown between RJ Barrett and Zion Williamson portends what may be a legendary rivalry

It’s not often that we create rivalries out of former teammates, but for the NBA’s Zion Williamson and RJ Barrett, this may very well become the case. These two players are tremendously similar, yet tremendously different. Both are high character, super-gifted, and played for Duke, as both led the team in scoring in 2018-19, which ended in the Elite Eight to give the Blue Devils what many would consider one of the most disappointing runs in NCAA Tournament history.

Despite their massive expectations, both players were individually touted as some of the best talents to the NBA Draft in an uber of years, with both of them being drafted in the top three. Zion was drafted No. 1 by the New Orleans Pelicans, while Barrett was picked third by the New York Knicks.

The NBA Summer League, which for years was more of a filler offseason group of scrimmages for NBA teams to find benchwarmers to fill out their rosters, has recently turned in to another way for the NBA to monetize an otherwise low-key offseason, whose highlights are usually the NBA free agency period and June’s NBA Draft.

But this year, we saw just how great this league can be as the two young Dukies played what may very well be remembered as a classic game. Not for any spectacular plays, but rather, for the absolute fitting imagery that took place, setting the stage for what might be a very long and fascinating rivalry between two great friends and great former teammates.

For both players, we got to see the flashes of greatness that show why they may be some of the game’s greatest talents. Frankly, between the two of them, Barrett, despite being the lower draft pick, may very well be the better of the two as far as a pro-ready candidate. Zion has always featured incredible explosion and athleticism, and this much was present in his debut, but there is no doubt that he is still an incredibly raw talent that still has a way to go in terms of player development.

What attracted scouts and fans alike was Williamson’s explosive plays and incredible motor, combined with a good-natured attitude and high character, as there’s no doubt that he has a very bright future in the NBA. The same can be said for Barrett, who has similar leadership potential and talent. In his Summer League debut, Barrett showed off an incredible ability to reach the cup and showed that at the next level, he has the ability to finish in traffic and against duress.

Interestingly enough, for both players, the biggest question will be whether or not they can consistently shoot from range at the next level. While at Duke, Barrett showed that in crunch time situations, he could be expected to make plays. Zion too showed he was able to finish when needed most, but for that to remain a factor in the NBA, both players will have to improve their range and punish teams for sagging on them.

While the Knicks opened as five-point favorites, the game ended prematurely as an earthquake struck late in the second half, resulting in the officials to suspend the contest. Both players will be super long shots to win a championship, and while Zion is favored to win Rookie of the Year, Barrett has some value as well, given that he has shown that he will be his team’s primary scorer and ballhandler, whereas Zion will have to play a lot off the ball.