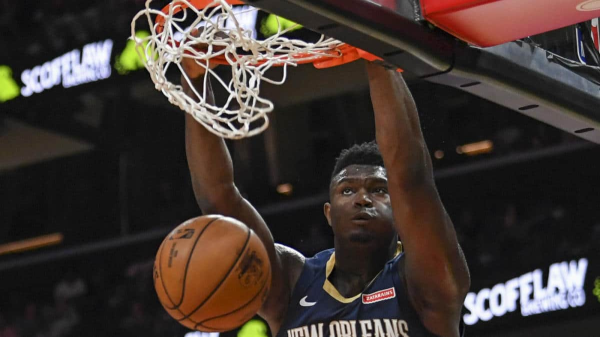 It took less than two minutes into his preseason debut for Zion Williamson to earn a gasping reaction in response to a monstrous, one-handed dunk. The first overall pick in the 2019 NBA Draft certainly looked like he belonged on an NBA court and gave us another taste of why he’s the most highly anticipated rookie in years.

In 28 minutes of playing time, Williamson led the Pelicans to a 133-109 win over the Atlanta Hawks as both teams prepare for the 2019-20 regular season. In addition to putting up New Orleans’ first five points of the game, Zion scored 16 total points, snagged seven rebounds, and handed out three assists.

Although Zion missed his two three-point attempts, nothing is stopping the hype surrounding a young man that many are eager to compare to LeBron James.

In just 18 minutes of play, guard Jrue Holiday led the team with 21 points. Yet it was Williamson who earned the second-best plus/minus in the game with +18 while on the court. Nicolo Melli earned a plus/minus of +29, and Holiday had a +16.

After a second preseason game in Chicago Wednesday evening, the Pelicans will play Utah, San Antonio, and the New York Knicks before facing off against Toronto on Oct. 22 in the franchise’s first regular-season game with Zion on the roster.

There’s no stopping the hype surrounding Zion and the Pelicans, but how much should there be? Let’s take a look at how much this team could achieve this year.

While the Pelicans may not have a top-tier, veteran star in the starting lineup, they can boast a wealth of depth behind both Zion and Holiday. In exchange for Anthony Davis, New Orleans acquired Lonzo Ball, Brandon Ingram, and Josh Hart in addition to draft picks from the Lakers.

Adding to that collection of players, Derrick Favors can throw in his 11.8 points, 7.4 rebounds, and 1.4 blocks per game that he racked up last year with the Jazz. And don’t forget about shooting specialist J.J. Reddick, who averaged 18.1 points per game for the 76ers a year ago.

Holiday can still claim leadership over the Pelicans, for now, citing his 21.2 points, 7.7 assists, and 5.0 rebounds per game last season as proof.

Although he wasn’t a prolific scorer with Los Angeles, Ball gives New Orleans some added depth and brings a solid defensive game to the team. Last year, Ball put up 9.9 points, 5.4 assists, and 5.3 rebounds per game.

It’s unfair to expect a championship run out of New Orleans with the likes of the Lakers and Clippers sitting atop the Western Conference, but this should be an exciting, young squad to watch this season.

Where The Odds Put New Orleans

It’s a new NBA with a Western Conference full of big-time duos, such as LeBron and Davis with the Lakers, Kawhi Leonard and Paul George with the Clippers, and James Harden and Russell Westbrook with the Rockets.

So, where do the Pelicans stand?

For now, New Orleans sits in a group of four teams with 100/1 odds to win the NBA Finals. Alongside the Pelicans are the Raptors, Heat, and Mavericks. That may not be the best company, but it certainly isn’t the worst.

And if Zion can emerge as a superstar in his rookie campaign, New Orleans will surely see improved odds in the future.

The Clippers lead the way with 7/2 odds, followed by LeBron’s Lakers (4/1). The Bucks have the best odds of any team in the Eastern Conference with 6/1, followed closely by both the Rockets and 76ers at 8/1.

For now, the expectations surrounding this Pelicans team aren’t through the roof, as New Orleans trails the likes of Utah (14/1), Boston (25/1), and San Antonio (50/1) regarding odds of winning this year’s NBA title. However, that figures to be a good thing in the long run, as Zion can improve his game and gain experience without the pressure of high expectations.