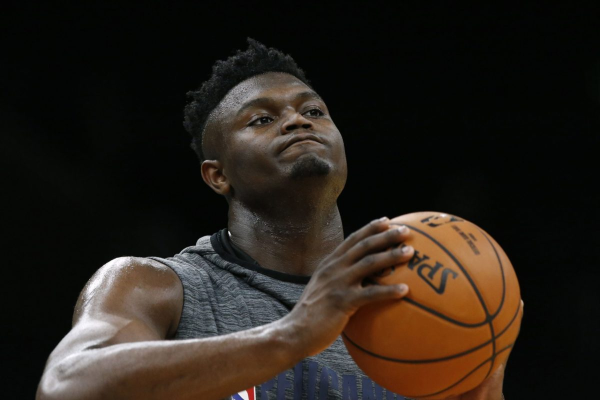 While the NBA season has been roaring on for months, it feels like it’s only just beginning for the New Orleans Pelicans. On Wednesday, Zion Williamson will finally play in a regular-season game.

As perhaps the most highly-anticipated prospect in the sport since LeBron James, Williamson was selected first overall in the 2019 draft after a standout year at Duke. And though we don’t know if he’ll blossom into the superstar player many believe he could be, we can be sure that the basketball world will have their attention acutely fixed on New Orleans Wednesday night.

It also appears that the NBA itself expects Williamson to be a spectacle that will attract viewers from all over the country, as four of Williamson’s first seven games are set to be televised nationally.

When Williamson takes the court for the first time in his professional career, he’ll be in front of his home fans as the Pelicans host the Spurs in New Orleans. And while it will likely take Zion time to find his rhythm within this team, we can expect some highlight-reel plays out of one of the most athletic players in the sport.

How Much Zion To Expect Wednesday Night

Coming back from a torn meniscus is something that has to be done with care and caution, so don’t expect Zion to play 30 minutes in his first game back after rehabbing from an injury.

New Orleans is expected to limit his time on the floor, though Pelicans executive vice president of basketball operations David Griffin said the team won’t have a “hard minutes restriction” on Williamson.

Instead, New Orleans will try to play Zion in short “bursts,” according to Griffin.

For coach Alvin Gentry, Williamson’s debut will be more about getting him on the floor with different teammates to see how to best move forward.

“I think the big thing for us is we just need to get him out there so all of this goes away and then we can start to figure out rotations and how we are going to play and things we are going to do,” Gentry said.

New Orleans began the year with a record of 6-22 and looked like one of the worst teams in the NBA. But after falling 13 straight times, Gentry and the Pelicans made some schematic changes, and now Zion is being welcomed back into a team vying for a playoff position.

The Pelicans have won 11 of their last 16 games, including a 126-116 win over the Grizzlies on Monday night when New Orleans erupted for 21 three-pointers, which is a franchise record.

Now, the 17-27 Pelicans sit just 3.5 games behind the Grizzlies, who occupy the eighth seed in the Western Conference.

New Orleans is on the rise and should gain another boost by Zion’s return, but it will have to overcome Memphis and the three other teams standing between it and the eighth seed if it is going to earn a playoff spot.

Zion’s Rookie Of The Year Chances

Although there’s a clear favorite for this season’s Rookie of the Year award, Williamson finds himself in the midst of a four-man race for the accolade without having played a single minute of meaningful NBA basketball.

Thus far, Ja Morant has led Memphis by averaging 17.9 points and seven assists per game. That’s why Morant is the frontrunner for Rookie of the Year with -250 odds.

Believe it or not, Zion is second on the list with odds of +800. He’s followed by RJ Barrett of the Knicks and Kendrick Nunn of the Heat, both of whom are sitting on +850 odds to win the award.

Williamson will try to begin closing the gap on Morant when he makes his debut against the Spurs Wednesday night.