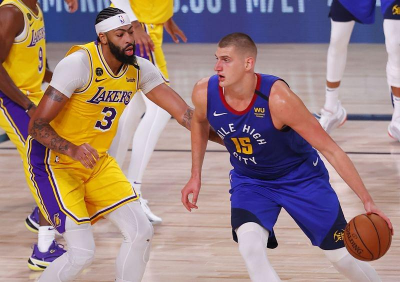 Game 5 of the Western Conference Finals between the Los Angeles Lakers and Denver Nuggets tips off on Saturday, September 26th at 6:05 p.m. PT. The Lakers will be the home team (in the bubble), and are leading the series 3-1. Denver is facing elimination, being down 3-1 for the third time this postseason. Meanwhile, the Lakers are looking to clinch a berth to the NBA Finals for their first time since 2010.

A look at the Lakers:

The Lakers looked to establish Anthony Davis early last game, he scored 12 of their first 14 points, beginning the game 6/6 from the field. He finished the game with 34 points total, shooting 10/15 from the field and going 13/14 from the charity strike. Kentavious Caldwell-Pope once again was the Lakers third leading scorer, finishing with 13 points. Dwight Howard had a very nice performance as well, in his first start this series he put up a double-double, recording 12 points and 11 rebounds.

One thing that the Lakers improved upon from Game 4 was their free-throw shooting. At 80%, they converted more of their chances at the line. They also flipped the outcome of the rebound battle, finishing with 51 in total while the Nuggets only had 39. Los Angeles stepped their defense up as well, their 9 steals helped lead to 17 fast breakpoints. Overall, the Lakers played better as a team than they did in Game 3.

What must the Nuggets do to win?

There are some positive takeaways that the Nuggets can build upon from Game 4, like the fact that Jerami Grant once again was huge on offense, putting up 17 points. Rookie Michael Porter Jr. also chipped in 13 points on 5/8 shooting, while going 3/6 from beyond the arc. Monte Morris played well once again too, finishing with 12 points and 4 assists. He has proven to be a reliable option as the backup ball handler.

On the negative side, Nikola Jokic finished the game with his second-lowest point total of the entire postseason, with 16 points on 13 shots. His 13 shot attempts were also tied for the lowest amount of shots he has taken in a game this postseason. If Denver is to win Game 5, Jokic has to be more aggressive.

The Nuggets also have to limit the amount of fast break points the Lakers score next game, as they lost by 6 points and gave up 17 easy points in transition. Another key to winning that Denver will have to improve upon is their team defense against AD. They can’t afford to allow him to play 1 on 1 with no defensive help and get hot again. The Nuggets have to make him work for everything, don’t be surprised if they double team him right out of the gate in the next game.

If the Nuggets lose because the Lakers’ other guys hit shots, then they’ll have to live with that. Denver has to somehow prevent both LeBron and AD from getting their usual 25+ points and make it very hard for the Lakers to win. They haven’t established a third scoring threat this series, and Caldwell-Pope has been the closest thing to that so far, but he’s only averaging 13.5 points a game this series.

Although we all love an underdog story, and the Nuggets have had a magical playoff run, our faith is on the Lakers pulling out Game 5. The Nuggets are a very young, resilient team. Yes, they have already come back from trailing 3-1 twice in the bubble, but those other teams didn’t have the playoff experience LeBron does. Look for him to come out in attack mode as he wants to appear in his first NBA Finals as a Western Conference champion and isn’t looking to let anybody prevent him from doing so.

Can the “Down 3-1 Nuggets” prevail against the established legend of the elimination game LeBron? This will be a matchup you won’t want to miss, that’s for certain! Tune in Saturday as the season will be on the line for Denver, for the Lakers; a trip to the NBA Finals.

Checkout Fanduel’s odds for Game 5 below;