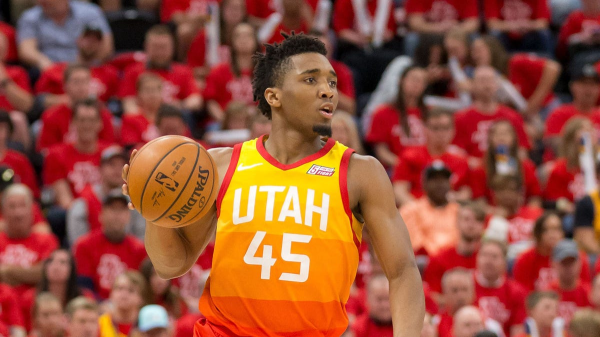 Wednesday night features a Western Conference showdown as the Utah Jazz (8-5) travel to the Target Center to take on the Minnesota Timberwolves (8-6). Although it is entirely too early to be watching the standings, the Jazz currently sit tied for fifth place in the Western Conference ranks, while the Timberwolves sit in seventh. Tipoff for this one is scheduled for 8:00 pm ET.

The Jazz have lost two in a row, including a 112-102 loss to these same Timberwolves at home on Monday. Now in the second game of a home and home, the Jazz will be looking to repay the favor by taking one in Minnesota. In Monday’s game, Bojan Bogdanovic led all Jazz scorers with 18, although they had six players score in double digits.

Minnesota is 5-5 in its last 10 games. In Monday’s win over the Jazz, the leading scorer for the Timberwolves was Karl-Anthony Towns, who scored 29 points and pulled down 13 rebounds. Guard Jeff Teague also had a solid game with 21 points and 11 assists. They will look to sweep the home and home on Wednesday.

Despite Monday’s outcome and playing on the road, the Utah Jazz are still 2.5-point favorites coming into this one. The over/under for points scored has been set at 218.

On the defensive side, the roles are almost completely reversed. The Jazz sit comfortably in second place in the league in terms of scoring defense, allowing a paltry 101.1 points per game (102 on the road). The Timberwolves are 25th, allowing 117.3 points per game (119.7 at home).

After being beaten by 10 at home on Monday, the Utah Jazz would love nothing more than to get some redemption at the Target Center on Wednesday. Leading the way this season for the Jazz has been guard Donovan Mitchell. Through 13 games, Mitchell is averaging 24.8 points per game on 45.6 percent shooting. He is also putting up 5.6 rebounds, four assists and 1.5 steals per game.

Next in scoring for the Jazz is Bogdanovic, who is averaging 19.7 points per game on 45.1 percent shooting, including 43.6 percent from the three, and 90.5 percent from the free-throw line. He is also averaging 4.1 rebounds and 1.8 assists.

Looking For Two In A Row

The Timberwolves would love to move up the Western Conference standings, and two wins in a row over the Jazz would certainly be a good start. Leading the way this season for the Timberwolves has been Towns, who has averaged 27 points per game on 51.2 percent shooting. He is also pulling down 12.1 rebounds, dishing out 3.8 assists and blocking 1.6 shots per game.

Alongside Towns, Andrew Wiggins is having a very successful campaign as well. In 11 games played, Wiggins is averaging 25.9 points on 47.8 percent shooting. He is also averaging 5.1 rebounds and 3.6 assists per game.

The Jazz have certainly played well, and Mitchell can take over a game, but all signs point to Minnesota for me. While the Timberwolves are only 3-4 at home, the Jazz are even worse on the road thus far at 2-4. In addition, there seems to be balance to this matchup as the Jazz host a great defense going against a great offense in Minnesota while Minnesota’s weak defense balances out Utah’s weak offense. With the balance and the home game, I am inclined to take Minnesota since it is getting 2.5 points in this one.