Trail Blazers vs Grizzlies: Everything You Need to Know Ahead of the NBA Play-In Game 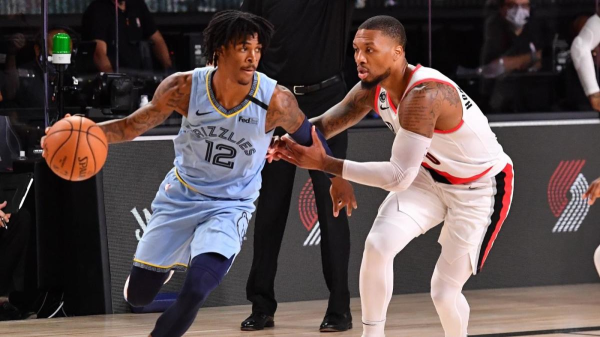 The Portland Trail Blazers and Memphis Grizzlies secured the 8th and 9th seed in the Western conference officially, after both teams were victorious in their final seeding games. Now, they will face each other on Saturday with a playoff match-up against the Los Angeles Lakers awaiting the winner. Portland secures the playoff appearance with a victory Saturday, while Memphis has to win on Saturday and again on Sunday to claim the playoff spot.

Here’s what you need to know about the match-up.

Portland won a shootout against Memphis Early in the Resumed Season

On July 31st, the Blazers and Grizzlies faced each-other for the second time this season. The first meeting way pre-hiatus, and a lot has changed since then. Due to the changed circumstances, we’re going to focus only on their most recent meeting.

Portland was victorious by a score of 140-135 in a high scoring overtime thriller. As the more experienced team between the two, Portland has an edge in crunch time and big moments. This was put on display in that overtime period, as the Grizzlies shot 25% as a team, opposed to the 62.5% the Trail Blazers shot.

Overall, Memphis was led by Jaren Jackson Jr., who has since been lost for the season. Further, they already had no answer for either Carmelo Anthony (7-10) or C.J. McCollum (14-21), who combined for 54 points. Memphis struggled throughout the seeding games, and it’s hard to see how they could have quickly fixed the defensive issues that plagued them last time they met Portland.

Lillard is on a Mission

Damian Lillard is well known for stepping up in the big moment. In the bubble he has done nothing but step up every single game. In 8 seeding games, he averaged 37.6 points per game with 9.6 assists. Oh yeah, he did that on just under 50% shooting as well! Lillard’s current tear, and many shots he has hit along the way, have been things you only see in video games.

Four other Blazers are chipping in over 16 points per game in the bubble as well, giving Portland one of the hottest offenses in the Association. If Memphis has any chance, it all starts with making Dame work hard and often for his points. That’s easier said than done, though, and may be impossible to do two days in a row.

Memphis is Struggling From Deep

The Griz are shooting just 31.7% from deep in the bubble so far. That’s concerning by itself, but becomes a big problem when you are locked in for a shootout against an offense thats firing on all cylinders like Portland right now. Portland will put up points, regardless of the level of defense played against them. Memphis has to not only work harder on the defensive end, but also has to start hitting jump shots.

We’re about to sew thee first ever play in game for the NBA playoffs, and it’s hard to know what to expect. One thing we know for certain, though, is that it will be top notch viewing.