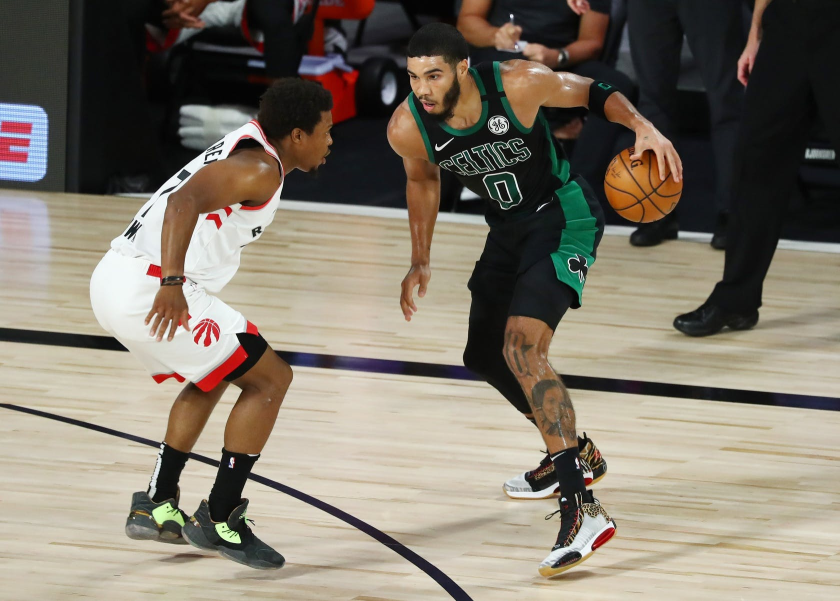 After a captivating double-overtime victory for the Toronto Raptors in Game 6, the series is poised on a knife’s edge at 3-3 ahead of Friday’s decisive showdown. Tip-off for Game 7 is at 9:10PM ET in Florida.

This series has certainly lived up to its billing. After losing Games 1 and 2, the Raptors responded as champions do with two clutch performances to level the series 2-2, including a series-saving, buzzer beating three by Toronto’s OG Anunoby with just 0.5 seconds left in game 3.

After a convincing 22 point victory for the Celtics in Game 5, it looked like the C’s might topple the reigning champions. But game 6 was the best of the series so far, Kyle Lowry’s 33 points and clutch defense down the stretch saw the Raptors through. Let’s take a look at the markets ahead of this crucial final game.

Who Are The Favorites?

The Celtics are favorites to clinch the series at a Moneyline of -130 on FanDuel. The Raptors are priced at +110 to secure two consecutive victories and the series win. The spread has the Raptors at +2, down from +3 in Game 6. The O/U for total points is at 203.5.

After a disappointing showing in Game 5, Kyle Lowry proved he was the man for the big occasion with a magnificent 33 points backed up by 8 rebounds and 6 assists. Despite trailing by as many as 12 points in the first half, the reigning champions refused to lie down. They took the lead before a Celtics resurgence forced overtime.

The Raptors would prove their winning mentality can get them over the line when it matters, a factor which should not be ignored at this crucial stage of the series and season.

Who Has Got The Stamina?

Having played the series at such a fierce intensity, fitness is likely to play a part in the game 7 decider. With both teams having had four players log 50+ minutes in game 6, it will be interesting to see who has the energy to get them over the line. This series, the Raptors starting 5 have a cumulatively played 1104 minutes, compared to the Celtics 1139. Expect the Raptors to be a little fresher, but not by much. Lowry especially has logged heavy minutes in nearly every game this series.

With the respective starting 5’s of both teams logging so many minutes, this final game could be decided by the bench. Norman Powell was hugely impressive for Toronto off the bench in game 6, scoring a decisive 23 points, most of which came in overtime. He could well make the difference in the final game of the series. If you are looking for a big win, there may be some value in a Toronto Raptors win by a margin of 1-5 (+470 on FanDuel).

The Importance of Finishing Strong

Over the series, the Boston Celtics have tended to be faster out of the blocks. In four of the six series games the Celtics have been leading after the first quarter. On two occasions the Raptors have managed to overturn a first quarter deficit to secure the win, if you back them to do that in Game 7 you’ll get great odds of +440 on FanDuel.

There is some value there. If we take into account their squad depth, it’s likely that the Raptors will have the edge in the final quarters. They are also proven champions who have the mentality to get over the line. If they can limit the damage in the first quarter they’ll be in a position to finish strong and secure the series win.

That being said, the Celtics could be out of sight in the first half especially if Jaylen Brown backs up his scintillating 31 point and 16 rebound Game 6 performance in Game 7. The rest of the Celtics team has a big role to play as well, they will need Kemba Walker to improve on his 5 points in 52 minutes from Game 6. If they can back up their big guns, there might be no catching the Celtics this time.

One thing Jayson Tatum has proven all series is his all round ability. Tatum has managed 30 assists across the series, with a play-off career high 9 in Game 6. If Tatum can continue this form, he may well prove to be the catalyst to get the Celtics over the line. If Tatum is on form expect him to tip the balance in Boston’s favor.

This series has been a nail-biting encounter between two teams who have refused to give in. In Game 7 we can expect more of the same and it may well go down to the wire. It’s certainly a difficult game to call but I can see the Raptors edging it, with their experience and quality coming off the bench, when it comes down to it they’ve proven they can get it done.