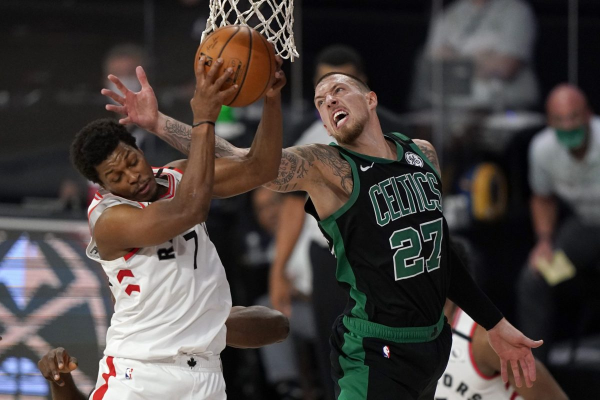 It is still relatively early on in the NBA postseason, and already we have seen some of the best matchups and series in a long time. Heading into Game 4, the series between the Toronto Raptors (1-2) and the Boston Celtics (2-1) is shaping up to be another example of a fantastic series, especially after the wild finish in Game 3.

The two are set to square off again on Saturday evening from the HP Field House with tipoff scheduled for 6:30 pm ET.

Down two games to none, the Toronto Raptors seemed like they would be in a world of hurt after the Celtics scored a go-ahead bucket with .5 seconds remaining on the clock. Unfortunately for Boston, .5 is all that OG Anunoby needed to drill a three to give the Raptors an unlikely 104-103 victory at the end of regulation.

In the win, Kyle Lowry led the Raptors in scoring with 31 points. He also added six rebounds and eight assists. Fred VanVleet also was solid with 25 points and six assists while the hero, OG Anunoby, finished with 12 points and 10 rebounds.

In the loss, Kemba Walker had led all Boston scorers with 29 points. Jaylen Brown added 19 points and 12 rebounds while Jayson Tatum had 15 points, nine rebounds, and six assists.

According to Fanduel, the Raptors come into this one as a slight favorite as Boston is +1 on the spread in this one. In terms of the moneyline, Boston sits at -102 while the Raptors are -116. The over/under on total points sits at 214.

If you are betting the series winner, Boston currently sits at -215 while the Raptors have moved to +172 after winning in Game 3.

On the offensive side, the Boston Celtics hold a slight advantage. They currently rank 11th in the NBA, averaging 113.3 points per game. The Raptors come in just a couple spots below at 13th averaging 112.9 points.

On the defensive end, these are the two best teams in the league in terms of points allowed. The Raptors hold the top spot allowing opponents to score an average of just 106.4 points per game. Boston comes in right behind them, allowing 106.7 points per game.

Raptors Hope To Even It Up

If the Raptors go on to win this series, OG Anunoby will be held in Toronto lore for years to come. His game-winning three in Game 3 with just half a second left allowed the Raptors new life. They will look to take advantage of it and even the series in Game 4.

To do so, they will rely on their depth. With the departure of Kawhi Leonard after their championship last year, the Raptors have had to balance their scoring on a nightly basis.

In seven games this postseason, Fred VanVleet has led the way thus far, averaging 20 points, four rebounds, and 7.4 assists per game. Next in terms of scoring is Pascal Siakam, who is averaging 18.4 points, seven rebounds, and 4.1 assists.

Boston Looking To Put Disappointing Game 3 Behind Them

Game 3 had to be a disappointment, but the Celtics will have to quickly forget about it; otherwise, they could see the momentum of this series shift quickly.

Taking The Celtics And The Point

At this point, the Celtics have two options. They can sulk after their Game 3 loss and find themselves tied after four games, or they can use it as motivation and come out with a purpose in Game 4. My gut feeling says they will do the latter.

On top of that, they are being spotted the point in the spread in this one. Given that the last two games have been decided by a combined four points, this game will likely be close. That is what happens when you have the two best defenses in the league going against each other.

With that in mind, I would have taken the team getting the points, no matter how the line came out. In this case, that means I am putting my money on the Celtics at +1.