The Defending Champs Clash with the Celtics Youth in round two of the Eastern Conference playoffs: Predictions, props and more. 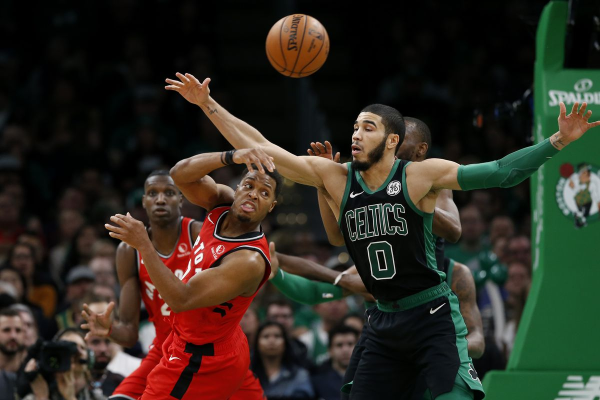 The defending Champions Toronto Raptors square up with the Boston Celtics in the Eastern Conference Semifinals following a commanding first round sweep by both teams. The Celtics finished off the Ben Simmons-less 76ers in four games. However, it came at a cost as they lost small forward Gordon Heyward to an ankle sprain for at least this upcoming series and maybe more.

Toronto dominated the depleted Brooklyn Nets roster averaging 126.25 ppg in the series, shooting lights out beyond the arc led by third year guard out of Wichita State Fred VanVleet. VanVleet led the 3-point barrage by connecting on 52.7% of his shots from 3-point range.

I believe this series will go seven games, with the Celtics prevailing on top with a 4-3 (+500 FanDuel) series win. The combination of Tatum, Brown and Walker will be too much for the Raptors to handle, especially with a hobbled Kyle Lowry who is listed day to day after an ankle injury in game four against Brookyln.

Boston dominated the regular season series against Toronoto, going 3-1 against the Raptors. I see no reason for that to change heading into the postseason.

Look for the Raptors point total to drop drastically as the Celtics fifth ranked regular season defense held the 76’ers to only 100.5 ppg.

Heading into game one, FanDuel has Toronto listed as a two-point favorite over the Boston Celtics with an o/u set at 216. It’s no surprise Vegas believes this is going to be a relatively low scoring affair as Nick Nurse and Brad Stevens pride themselves on defense respectively.

I also believe taking the under 216 points (-110) in this game is a steal. The Toronto Raptors ranked 2nd in regular season total defense while the Boston Celtics followed close behind ranking fifth. Serge Ibaka for the Raptors and Daniel Theis of the Celtics are a huge reason behind that as both have shown to be powerful rim protectors in the paint.

The key for Boston in the first game is whether Kemba Walker can sustain his first round play. Kemba averaged 24.25 ppg in the 76’ers series, as there was some uncertainty coming into the bubble about whether lingering knee injury from the regular season would harm his performance. Walker looked like himself from the first three months of the season, and that’s why I am taking Kemba over 21.5 points (-122 DraftKings) in game one of the series.

The two key’s for Toronto is whether Pascal Siakam and OG Anunoby can slow down the two headed monster of Brown and Tatum, and whether Raptors can exploit Boston’s second rotation. In game four against the Brooklyn Nets, the Raptors bench erupted for 100-points, the most bench points by a team in the modern era. Hayward’s ankle injury was a huge blow to Celtics depth, as now Grant Williams, Brad Wannamaker and Romeo Langford will play a larger role in this series off the bench.

I am going to go as far to declare that the winner of this series will come out of the East, and reach the NBA Finals. I look forward to watching the Celtics youth clash with the savvy vets of the Toronto Raptors.