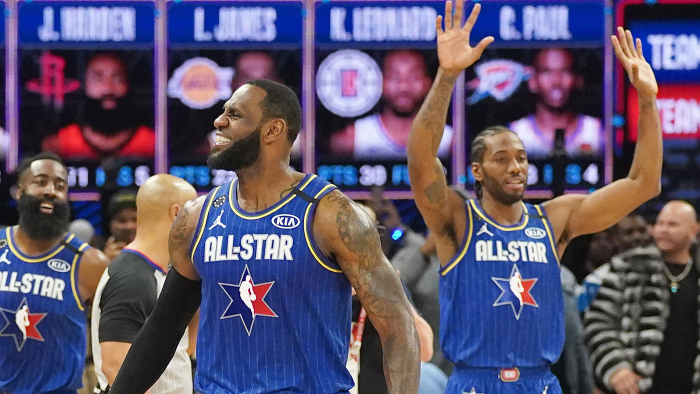 In just about every measure, the weekend was a huge success for the NBA. The All-Star game was a hard-fought game full of drama, the dunk contest was as entertaining as it was controversial, and there was hardly a boring moment throughout.

Let’s take a look at how the weekend played out.

All-Star Weekend kicked off with the Skills Challenge – a three-round event that tested players against an obstacle course. Guards and big men alike were showcasing their dribbling, passing, and shooting talents, which would normally favor the smaller ball handlers.

Yet the big men won all four first-round matchups, eventually setting up a final between Bam Adebayo and Domantas Sabonis. After big men won the first two events in which frontcourt players were included, we told you to watch out for guys like these.

Interestingly enough, Sabonis and Adebayo were the two longshots of the event, according to Fanduel Sportsbook. At +1200, Adebayo came out victorious over Sabonis (+900).

When Joe Harris came back to defend his title as Three-Point Contest champion, he was marked as the favorite with odds of +350. Harris failed to make the final round, which was contested by Devin Booker, Davis Bertans, and Buddy Hield.

With a big performance in his last attempt, Booker put up a strong 26-point effort. It wasn’t enough to best Hield.

By hitting four of his five shots on the money rack, Hield reached 27 points on his final shot of the contest. At +700 odds, Hield held the longest odds of any player in the final round.

Because of the subjective nature of the scoring in the Dunk Contest, the event isn’t something that many sportsbooks allow betting on. Saturday night, we saw why.

An entertaining event pitted Aaron Gordon against Derrick Jones Jr. in the final. After the scheduled round and a tiebreaker round, both players remained deadlocked. It wasn’t until the second tiebreaker round that Jones Jr. was declared the champion.

However, most fans felt that Gordon had the better performance in the competition after dunking over 7-foot-5 Tacko Fall and hitting a 360-slam after catching a rebound off the side of the backboard.

The All-Star Game seems to have significantly benefitted from the institution of the Elam Ending rule, which made both teams race to reach a final score in the fourth quarter to win the contest.

After three quarters, Team LeBron’s 124 points trailed that of Team Giannis’ 133 points. Because of the new rule, which put the final score target at 24 points (Kobe Bryant’s number) plus the higher of the two scored through three quarters, the winner would be the first to 157 points.

Both teams played defense, committed tactical fouls, and made the game feel more like a playoff contest than the All-Star games we’ve come to expect.

After a fun fourth quarter, Team LeBron found itself up 156-155 and with possession. After a foul, Anthony Davis went to the line. The drama heightened when Davis missed his first attempt, but the second shot swished and earned Team LeBron, a 4.5-point favorite, the win without covering the spread.

Kawhi Leonard put up 30 points in the contest, 25 of which came in the first half. That was good enough to earn him the first-ever Kobe Bryant MVP Award, which the All-Star accolade will now be permanently named.

Despite his achievements last year, Leonard was a longshot to win the award at +2000. He was able to beat out favorites like Giannis Antetokounmpo (+350) and James (+400) to claim the trophy.