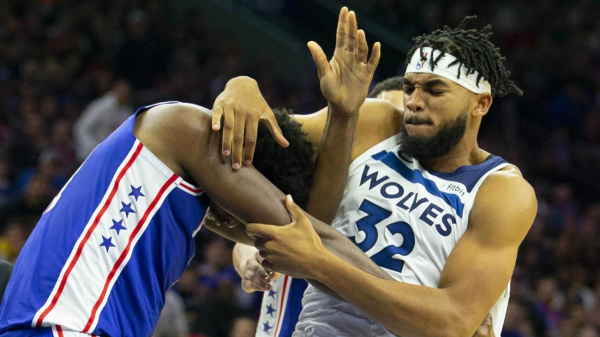 Throughout his young career, Philadelphia center Joel Embiid has prided himself on his ability to get under the skin of his opposition. When the Philadelphia 76ers and Minnesota Timberwolves faced off Wednesday, the irritant that is Embiid was too much for Karl-Anthony Towns to ignore.

The result was an altercation in which Embiid and Towns grappled with one another until crashing to the floor with a mob of bodies trying to keep the two apart. And as the two players kept the rift going after the game with social media jabs at one another, the NBA handed each player a two-game suspension for their respective roles in the quarrel.

A suspension is no surprise after Embiid and Towns became physical with one another, including a missed punch from Towns and a poke of the eye from Embiid, but NBA vice president Kiki VanDeWeghe also noted that the players’ “continued escalation following the incident” played a part in the league’s decision.

Also involved in the altercation was Ben Simmons, who jumped onto Towns’ back when the big man was on his stomach before the 76ers guard put his arm around Towns’ neck in what appeared to be a headlock. Philadelphia argued that Simmons was trying to hold Towns back to keep the skirmish from escalating further, and the league agreed to the point that Simmons was not disciplined.

So, after Wednesday’s clash during Philadelphia’s 117-95 win over Minnesota, which team will be hurt the most without their star big man?

The 76ers Without Embiid

Embiid and Towns, who’ve both proven to be impactful players in the post, will begin serving their respective suspensions on Saturday. Let’s take a look at which team is most likely to have the toughest time without their center.

We’ll start with the 76ers, who kick off a four-game road trip with a game against the Trail Blazers in Portland Saturday. Two days later, Philly will take on the Suns in Phoenix without Embiid on the floor.

To put it simply, Embiid is a big loss for the 76ers. In addition to his defensive presence in the paint, Embiid has led Philadelphia in scoring in two of its four games thus far after a 36-point performance against Atlanta and his 19-point game against Minnesota.

With those numbers, Embiid has helped the 76ers get off to a perfect 4-0 start to the season in which Philly aims to contend for an Eastern Conference championship. In fact, at +700, the 76ers have the fourth-best odds to win the NBA Finals and are behind only the Milwaukee Bucks (+525) in the East.

But while Embiid will be missed, a well-rounded 76ers squad featuring Simmons, Al Horford, Tobias Harris, and Josh Richardson in the starting lineup should fare well against the Blazers and Suns, who are both 3-2 on the year.

The Timberwolves Without Towns

The loss to Philadelphia was the first of the season for a Timberwolves team that now sits at 3-1 and in second place in the Northwest Division. Without Towns on the floor, the Wolves will first visit Washington, D.C., to face the Wizards before a home game against a good Bucks team.

Thus far, Towns has been an absolute force for the Wolves. In the team’s four games played, Towns has led Minnesota in scoring twice and in rebounds in all four contests.

On average, Towns is scoring 27.3 points, reeling in 11.5 rebounds, dishing out four assists, and blocking 1.8 shots per game.

While the 76ers can cover up Embiid’s absence with other players, the Wolves will have to rely heavily on Andrew Wiggins and Jeff Teague to pick up the slack against 1-3 Washington and 2-2 Milwaukee.

With a higher level of performance on a lesser team, Towns’ absence figures to be the more impactful one at this point, especially considering that Minnesota is nowhere close to the favorites. In a group of teams sitting on +15000 odds to win the NBA Finals, the Wolves are much closer to the bottom than the top.