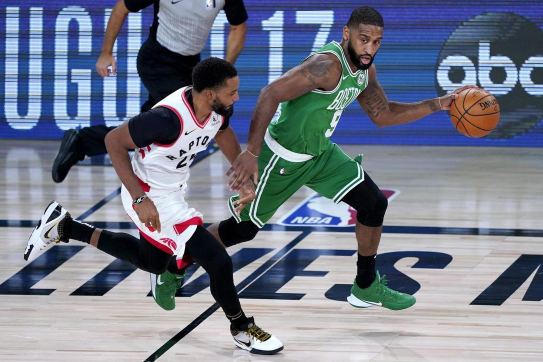 Despite falling down 0-2 in the best of seven Eastern Conference Semi Final, the Toronto Raptors are -110 favorites against the Boston Celtics when the two teams match up Thursday evening. The game starts at 6:40 pm EST in the Orlando bubble. The over/under is set at 215.

In game one it was all Celtics — Boston got out to a 39-23 (16 point) lead at the beginning of the first quarter and never looked back. The Raptors won only one quarter the entire game (31-29 3rd quarter) and looked out of sorts, shooting well below their season average from the floor and beyond the arc. Kyle Lowry, returning from an ankle injury, led the way with 17 points but was one of only two players who broke 15 points — Serge Ibaka was the other.

In game two, it appeared the Raptors had sorted out there offensive struggles from the first game, but in the second half the 3-point issues returned and Marcus Smart caught fire. Smart finished with 19 points and seemingly couldn’t miss from three as the Celtics outscored Toronto by 11 points in the fourth quarter for a 102-99 win.

While Kemba Walker struggled in game two — shooting only six of 18 from the field and one for eight from deep — Marcus Smart flourished. Smart was unstoppable for Raptor defenders, shooting 46.2% from the field, but six for 11 from 3. When the game got close and Walker was struggling, Celtics coach Brad Stevens turned to Jayson Tatum and and Marcus Smart to make plays and both delivered. When Gordon Hayward left the opening series with a potentially playoff-ending injury, many wrote off the Celtics title chances, but if Marcus Smart continues to play quality defense and make shots when Boston needs them, the Celts will top the defending champs and potentially more.

When NBA Finals MVP Kawhi Leonard elected to go home in free agency and sign with the Los Angeles Clippers, many pundits wrote off the Raptors in 2020. Toronto, however, posted a higher win percentage this year than they did in their title season in 2019 and a large part of that was the (second) breakout of Pascal Siakam. Siakam (alongside a reemergence of Kyle Lowry’s scoring) became the primary scoring option on a deep team but questions still lingered on his ability to produce in the playoffs and in crunch time. So far, Siakam has not met the standard he set for himself in the 2019 playoffs and 2020 regular season. If the Raptors are to make another title run (or simply beat the Celtics), he will have to assert himself as one of the best players in the series.

The Pick: (Odds via Fan Duel)

Coming into the series I would have picked Raptors in six, and I still think Toronto pushes this series past the minimum games (though I would now lean Celtics in seven). I think this Toronto team is too deep, too well coached and too experienced to fall down 3-0 and with no ‘home advantage’ factoring in, I will happily take Toronto at -110. The more interesting bet, for me, is the total (215) as this is a well coached and defensive battle of a series so far. I don’t see Toronto’s 3-point shooting failing to show up for a third straight game (if it does they are done), so I would also bet the over unless the line moves up prior to tipoff — perhaps parlaying the Raptors ML and the over for bettors looking for a bigger pay day.

Tonight, two pitchers whose records could use a little polishing match up as the St. Louis Cardinals welcome the Miami Marlins to Busch Stadium to open a three-game series. Cardinals hurler Adam Wainwright has not picked up a win since May 20, while Pablo Lopez’s win in his most recent start last week was his END_OF_DOCUMENT_TOKEN_TO_BE_REPLACED