Raptors Shock the World; Warriors Dynasty in Shambles; What Now? 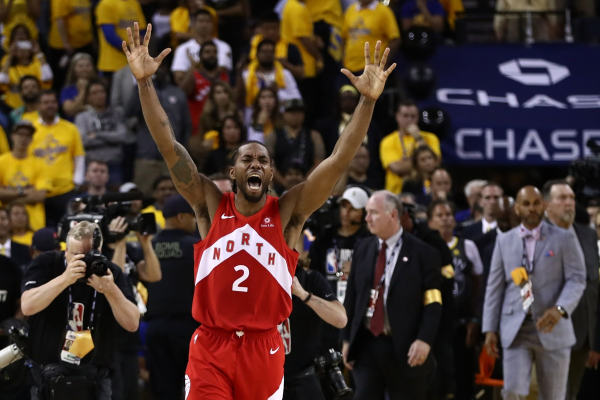 In the aftermath of the NBA Finals, the shocking Toronto Raptors win sends shockwaves that will ripple into next season

When Kawhi Leonard sunk a free throw to put the Raptors up four to clinch Game 6 of the NBA Finals and Toronto the world title, he also sunk a dagger into the proverbial hearts of millions of Golden State Warriors fans. But bettors too felt the plunging stab. Toronto, who was a sizable underdog to win the NBA Finals since the season’s tip-off, rendered countless tickets on the Warriors to win it all null and void.

As slim underdogs to close out the series in Game 6, the Raptors’ win capped a wild, frenzied run, but it also resulted in utter devastation for the Golden State Warriors. Unrestricted free agent Kevin Durant ruptured his Achilles, and star guard Klay Thompson shredded his ACL in a freak non-contact injury. It also remains to be seen whether or not Kawhi Leonard will return to the Raptors next season.

In just one game, the trajectory for teams in both conferences is completely open, which means gamblers should keep an eye on a few storylines.

With the potential end of the Warriors’ dynasty apparent following Game 6, a few Western Conference teams now bring tremendous value to the table, assuming they too can remain healthy. Based on recently released odds out of Las Vegas, the 2020 NBA Champions Futures book looks incredibly different, in just a matter of a few days.

The Warriors, who just a week or two ago were favorites to win it all at about +200, are now +1400 — an incredible shift. Despite their decimating injuries, there is still a lot of value in the Warriors at 14-1. With a core system in place, a brilliant front office, and the likes of Draymond Green and Stephen Curry still healthy and capable, there’s no doubt that they could still make a run.

Interestingly enough, the Los Angeles Lakers, who failed to make the playoffs last season, are now the favorites to win it all.

These futures odds seem to suggest that Anthony Davis may be headed to LA to play with LeBron James, and if that is the case, there is no doubt the Lakers could transform into title favorites overnight.

If these odds were precisely predictive of how things play out, a Houston Rockets-Los Angeles Lakers NBA Finals would be the most likely result.

While the Raptors are the reigning champs, these futures odds, interestingly enough, seem to suggest that Kawhi Leonard may not be returning to Toronto. All rumors seem to point to Kawhi heading to the Los Angeles Clippers, and if so, it would render the chances of a Raptors repeat very, very unlikely.

Regardless, the Raptors are still listed as +1000 to win it all, but frankly, there’s absolutely no value in that number, and if Kawhi fails to return, you can consider any of those wagers as dead money.

Ahead of Toronto, the Milwaukee Bucks are still the favorites to win the East at +600. After taking a 2-0 lead over the eventual champions, Milwaukee choked their lead away and lost in six games to the Raptors.

With revenge on their minds, the likes of Giannis Antetokounmpo and company certainly have some value at +600, but the Philadelphia 76ers at +1200 also deserve a close look.

Keeping a close eye on free agency, as well as the draft, may very well lead to some shocking deals, but until more intel is dropped, it’s hard to pull the trigger on any futures bet as so much is still in flux.