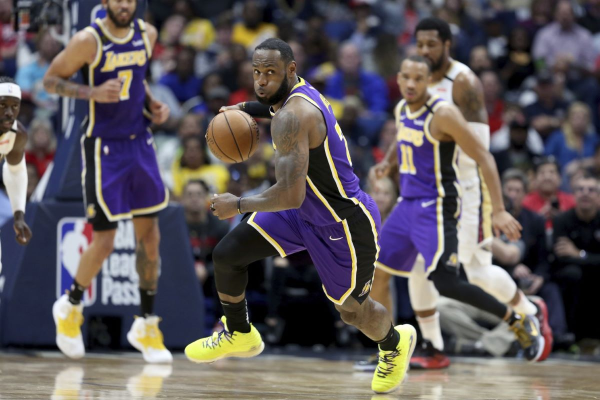 Tuesday night features a matchup of Eastern versus Western playoff teams as the Philadelphia 76ers (37-24) travel to the Staples Center to take on the Los Angeles Lakers (46-13). The 76ers come into this one currently tied for fifth place in the Eastern Conference with the Indiana Pacers.

For the Lakers, they come into this one dominating the Western Conference, leading the second-place Denver Nuggets and LA Clippers by 5.5 games. Both teams will be looking for the win on Tuesday as the playoffs start to creep up. Tipoff for this one is scheduled for 10 pm ET.

For the Philadelphia 76ers, they come into this one banged up, and it is affecting them on the court. They have lost three of their last five games, including a 136-130 loss to the LA Clippers on Sunday. They will look to bounce back against a very tough Lakers team on Tuesday but will have to lose their road woes to do so. On the season, they are 9-22 on the road.

For the Los Angeles Lakers, they come into this one having won eight of their last nine. Their lone loss in that stretch was a 105-88 loss at the Grizzlies. In their last game on Sunday, they beat the New Orleans Pelicans 122-114 on the road. They will look to defend their home court, where they have been an impressive 21-7 this season.

The Los Angeles Lakers come into this one as a whopping 11.5-point favorite playing at home. The over/under for total points scored is set at 220.

On the defensive side, these two are pretty comparable. The Philadelphia 76ers currently rank 5th in the NBA in scoring defense. They are allowing 107 points per game (111.5 on the road). For the Lakers, they come in just a couple spots behind them at 7th, allowing 107.1 points per game (105.2 at home).

Unfortunately, this is far from the ideal situation for the Philadelphia 76ers. Right now, three of their starters are currently out with varying afflictions. For Joel Embiid, he is currently out with a shoulder injury. The All-Star is averaging a double-double with 23.3 points, 11.8 rebounds and 3.1 assists.

Ben Simmons is out with a back issue. That is another 16.7 points, 7.8 rebounds, 8.2 assists and 2.1 steals per game gone for the 76ers. Lastly, Josh Richardson recently suffered a concussion. He was averaging 13.9 points, 3.4 rebounds and 3.1 assists.

Still, the show must go on. Philadelphia still has Tobias Harris, who is their second-leading scorer. He is averaging 19.2 points, 6.7 rebounds and 3.1 assists. Furthermore, look out for Shake Milton. While the guard is averaging just 8.8 points, 2.2 rebounds and two assists per game, last game he went off for 39 points. Philadelphia will need more big games from him while that trio is out.

While not to the level of the 76ers, the Lakers have had some injury troubles too. Star Anthony Davis sat out last game with a knee injury, and he is questionable for Tuesday. On the season, he is averaging 26.4 points per game, 9.4 rebounds, 3.3 assists and 2.5 blocks.

Even without Davis, though, the Lakers still have LeBron. “King” James is averaging a remarkable 25.5 points, 7.8 rebounds, 10.6 assists and 1.2 steals this season. In his last game, without Davis, he went for a triple-double scoring 34 points, grabbing 12 rebounds and dishing 13 assists.

Also playing well is forward Kyle Kuzma. On the season, he is averaging 12.7 points, 4.3 rebounds and 1.3 assists. In Davis’ absence the other day against the Pelicans, Kuzma stepped up to score 20 points while bringing in 4 rebounds and an assist.

Lakers Win, But Can They Cover?

Obviously, it is never ideal when you have to face the Los Angeles Lakers at the Staples Center, but it is a downright nightmare to play them without three of your top players. Unfortunately for Philadelphia, that is exactly the case.

With that in mind, I see the Lakers taking this one relatively easily. Obviously, keep an eye for the health of Anthony Davis as his health may determine how comfortable you are taking them at -11.5, but for my money, I like the Lakers to win and cover regardless of whether Davis plays or not.