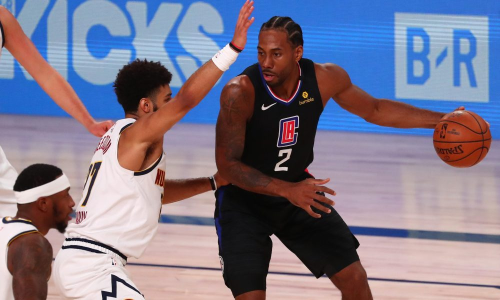 The Denver Nuggets find themselves down 3-1 for the second series in a row entering Game 5 of the Western Conference Semis against the Los Angles Clippers. Tipoff is scheduled for Friday, Sept 11 @ 8:30 p.m. EST.

The Clippers are looking for their first-ever Western Conference Finals appearance and are now one win away from doing so. They enter Game 5 as 8.0 point favorites, according to DraftKings and FanDuel Sportsbooks. The moneyline bet currently has the Nuggets at +285 on DraftKings and +275 on FanDuel.

What stands out for the Clippers

Kawhi Leonard is one win from doing in one season what no one else has been able to do in 50 years for the Clippers, and that is get them past the second round.

The 2x NBA Finals MVP lit up the boxscore in the 96-85 win on Wednesday night. Leonard racked up 30 points, 11 rebounds, four steals and two blocked shots. The last two performances for Kawhi have made up for his Game 2, which saw him shoot only 24 percent from the field and 0-3 from deep.

Leonard, along with some scoring bench help from Montrezl Harrell (15) and Lou Williams (12) helped build an early 18 point lead in the second quarter, and their defense basically shut things down from there.

If Kawhi and Paul George can continue to shut down Jamal Murray and company, Game 5 should be a walk-in-the-park win. Not to say anything is guaranteed, especially in the NBA Playoffs, but LA has proven they can control the outcome of the game if they prevent players like Jokic and Murray from getting hot. The Nuggets don’t seem to have many other cards to play.

What stands out for the Nuggets

Michael Porter Jr.’s interview after the Game 4 loss saw him answer questions about why he attempted only two shots in the entire second half, explaining that Denver’s game plan was to keep going back to Jokic and Murray to nail shots in the third and fourth quarters.

That strategy would have worked if Murray was playing as he did against the Utah Jazz, however that has not been the case in the Second Round. The former first-round pick has averaged 17.7 ppg in this series and only 14.6 ppg in each of Denver’s three losses.

MPJ has been showing exponential growth as the postseason progresses but his feeds in crucial short-game situations haven’t been increasing. While Jokic continues to do what he does and has led the Nuggets in scoring in the last four games, the supporting cast needs to improve in Denver has any chance of surviving to a potential Game 6 or 7. They will need a big game from MPJ.

Who will win Game 5? Clippers are the safe bet

We saw what Denver can do when they compete for a full four quarters, but it is pretty obvious which team is really meant for the playoffs…and it’s not the Nuggets.

The Clippers have one of the most dominant duos of bench players in the entire association in Lou Williams and Montrezl Harrell; these two would be starters on any other team. The Clippers depth, bench play, and the big-game experience of coach Doc Rivers and Kawhi should give them the end.

The game plan for L.A. will not change much on Friday night, compared to the Nuggets who have will have to find another winning strategy.

Once again, the Clippers are the favorite to take the dub, and this time the spread is eight points. The moneyline also remains about the same as it has for the last two outings. Denver has a +285 moneyline,while the Clippers are at -360. The likelihood the Nuggets outperform their odds are up to the adjustments they might make on offense. Expect more action from MPJ and starters Paul Millsap and Gary Harris, who has been more impactful on the defensive side of the ball but now needs to score some points as well.

Both DK and FD have Game 5’s over/under total at 217. In Game 4 the teams combined for 181 points and 40.75 percent from the field. If you want to assume that Friday will turn into an offensive shootout, that’s up to you, but do so with caution.

The player props have not yet been released. Last time around, we suggested the over on Jamal Murray’s shooting but he came out and failed to get hot. The safe bet will be to stay away from the Denver props and look at Kawhi. The man just scored 30 points for the sixth time in this career during the playoffs, and with the Western Conference Finals and the Lakers now in sight, expect big numbers from Leonard to close this series out.