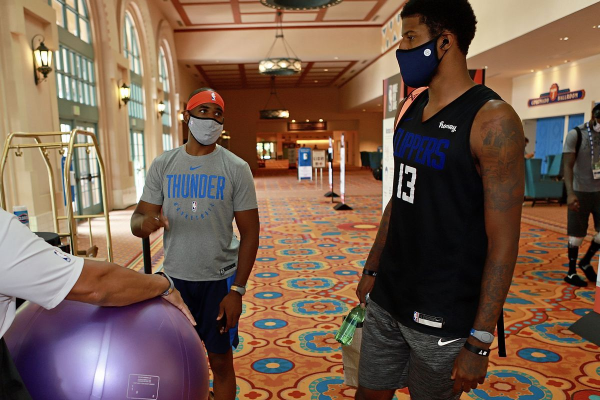 As the National Basketball Association reboot is now a little more than a week away, all of the final preparations are being made to ensure this season reaches a conclusion. So far, the league is off to a great start as no players have tested positive for COVID-19.

The reboot will take place in Orlando, Fla., over the next few months. Having no positive tests in a state that has some of the biggest increases is certainly something to be proud of.

“Of the 346 players tested for COVID-19 on the NBA campus since test results were last announced on July 13, zero have returned confirmed positive tests,” the NBA announced in a statement. “In the event that a player on the NBA campus returns a confirmed positive test in the future, he will be isolated until he is cleared for leaving isolation under the rules established by the NBA and the Players Association.”

How is the NBA Handling COVID-19?

Before heading to Orlando, there were some teams that experienced some chaos with the coronavirus. The Brooklyn Nets had numerous star players – Kevin Durant, Spencer Dinwiddie, DeAndre Jordan – all test positive and decide not to make the trip to Orlando.

The Sacramento Kings also had four players test positive before coming to the bubble, but it appears that things will be just fine for them.

Luckily, the NBA had some time to watch how other professional leagues were handling their business. Major League Soccer has been underway for more than a week, and Major League Baseball just started exhibition games over the weekend.

The NBA will begin scrimmage games during the week and finally get the ball rolling with some type of live game action. Of course, the teams have all been practicing already, but the fans haven’t seen live NBA action since mid-March.

While the level of interest in basketball is certainly there from diehard fans, the league will have to do something about those threatening to boycott watching the games because of political differences. Just this week, Dallas Mavericks owner Mark Cuban got into a Twitter shouting match with Senator Ted Cruz, a Republican representative of Texas.

Just when the NBA thinks it has one problem (COVID-19) figured out, it has to deal with these worrisome comments from Cuban and Cruz. Teams are already losing money with no fans in the stands, but we have seen political stances be a reason for sponsors to pull their money and fans to rescind their interest in the team.

It was initially Mark Davis, a Dallas-Fort Worth area radio show host, that took to Twitter and started this whole spat.

“I am so ready to be in on this year’s #Mavericks home stretch,” said Davis on Twitter. “So much promise, so much personality. But the minute one player kneels during the anthem, I am OUT. Surely, @MCuban can lead the way for #Mavs, #NBA to do what gesture they wish without insulting the nation.”

Cuban replied simply with a “bye” in retweeting Davis’ initial tweet. That prompted Cruz to respond to Cuban.

“Really??!?,” said Cruz. “NBA is telling everyone who stands for the flag, who honors our cops and our veterans, to ‘piss off?’ In Texas, no less?”

Obviously, something needs to be done, or talks need to be had so that both sides can come to an agreement and hopefully end this bickering once and for all. It probably will take decades, or even generations, to have everyone on the same page. However, it can’t hurt to start trying now.