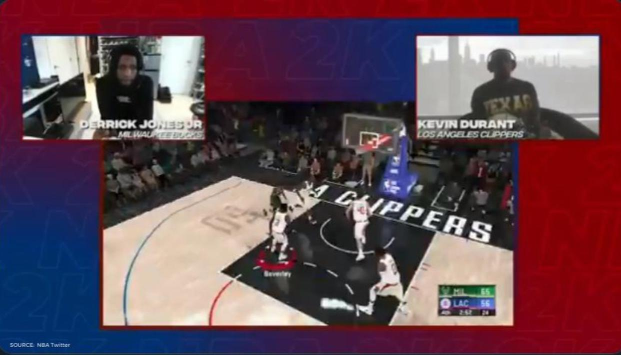 Ever since the professional sports leagues in the United States decided to cancel or postpone their games due to the coronavirus pandemic, Americans have been looking for a way to pass the time. More specifically, they have been looking for newer things to bet on. One of those newest fads was NBA players playing against one another in one of the most popular video games out there.

Well, it didn’t take long for our fun with the NBA 2K20 Players Only Tournament to come to an end. As (bad) luck would have it, the integrity of the contest was already compromised.

When a ton of bets were placed on 16th-seeded Derrick Jones Jr. of the Miami Heat to beat top-seeded Kevin Durant of the Brooklyn Nets, it was clear that was a group of people knew the outcome of the game before it started. Jones did wind up winning the first-round matchup easily by the score of 78-62.

“We initially made Durant the favorite to win the tournament, but when the bets were completely one-sided toward Jones, it became obvious that someone knew the outcome of the game.” said Robert Cooper, odds manager over at SportsBetting.ag, a company that wound up losing in the low five figures during the first round of the NBA 2K20 Players Only Tournament.

NBA 2K did not immediately respond to a request for comment.

It’s interesting to note that teams using the Milwaukee Bucks in the first round of the NBA 2K20 Players Only Tournament went 4-0 and won each game by at least double digits.

The current odds for the rest of the NBA 2K Players Only Tournament are as follows, according to SportsBetting.ag:

Beverley started as a longshot to win the tournament at +2000 odds and now finds himself as the favorite going forward. A pair of Phoenix Suns’ teammates in Booker (+275) and Ayton (+650) are both avid gamers and have a real shot for one of them to take the crown back to the desert.

Of course, Jones Jr. (+450) is intriguing after his first-round victory over Durant, while Young (+650) showed that he can score plenty of points on the virtual court, just as he does in reality.

It’ll be interesting to see if these odds stay the same, or if they even make it out into the public for betting consumption. The NBA2K20 Players Only Tournament was not legally available at any sportsbooks operating in the United States. It was, however, allowed on several different offshore locations.

The winner of the NBA 2K20 Players Only Tournament will select a charity to donate $100,000 in their name, which will be made by 2K, the NBA and the NBA Players Association to support the coronavirus relief.

As for the real NBA, Commissioner Adam Silver came out and said that no realistic decisions would probably be made until May 1. After all, the true peak of the coronavirus outbreak is supposed to reach its height at some point over the next couple of weeks. That leaves travel plans and personnel safety in a real tizzy when it comes to planning these things out.