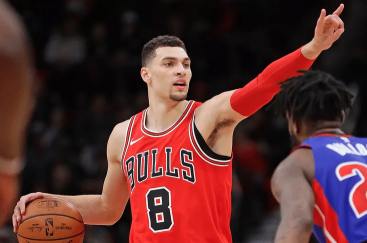 It was a wild Wednesday night in the NBA, and it was the last busy night until after the All-Star Break next week. Eight days off have begun for 24 teams. Let’s get to what you came here for. To read about the best performances from last night.

In a high-scoring affair with the Wizards, it was Pascal Siakam who rose to the occasion for the Raptors and had himself a career-night. He made 15(!) of 25 (!!!!) shots, good for 44 points. He also pulled down 10 rebounds, picked up a pair of assists, and blocked three shots. It was another (yawn) rest day for Kawhi Leonard, and so Siakam decided that this would be the day he let the NBA know just how good he was. He’s been brimming with potential all season, and he showed out for the first time, in a way nobody expected.

The Nets and Cavs played into a third overtime last night, with both teams relatively short-handed. It made for a wild game, and one the Nets only one thanks to their new All-Star, D’Angelo Russell. D-Lo shot just 1-6 from the floor and has two points in the first half, but when the fourth quarter hit, he just went nuts. He finished the day 13-30 from the floor, hitting big shot after big shot, with a 36-7-8 line. DeMarre Carroll’s three to force a third OT, at the buzzer of the second was impressive. But back to Russell… when the team was missing various playmakers, he never let them sink.

Jordan Clarkson was out there going shot-for-shot with Russell. He put in the best bench performance of the NBA season, possibly even more impressive than Lou Will’s 45 earlier this week. In 48 minutes (!!!) of action off the bench, Clarkson poured in 42 points on 16-34 shooting, pulling down eight rebounds and also grabbing five assists. If you’re one of the people (like me in two leagues) that have him in fantasy, he did not let you down this evening. He was hitting wildly deep threes and contested layups and floaters the whole game. He could be a big part of the Cavs future with performances like this. He’s averaging 17.2 ppg for the season. 0 starts made.

In a game between the Bulls and Grizzlies, a guy who had not been around for too long was the one who made all the difference. This has been a season chock full of losses for the Bulls, but not this time. Zach LaVine and Lauri Markkanen have another true baller on their squad! Otto Porter Jr. lit Memphis up for a career-high 37 points, hitting 16-20 shots (80%), including three of five threes. He also pulled down 10 rebounds and dishes out a few assists. Porter is showing that he was not a great fit in DC and really needed this change of scenery. It’s common knowledge to fans, and now it is to the rest of the league.

Last but certainly not least, we have Lou Williams, who followed up a 45-point performance against the TWolves with another impressive one last night. He hit 12 of 16 shots, pouring in 30 points in just 22 minutes, while also dishing out 10 assists. He did it yet again, and for the year is averaging 20-3-5.3, shooting 42% from the floor and 37% from three. While a ton of Clippers players were shipped out at the deadline, Lou has continued to hoop at a high level.

Jokic posted a 20-18-11 triple-double, but we’ve become so used to it that it is a little less impressive now.

What a night in the hoops world!