NBA Finals wrap: So who’s at the top in 2022 championship futures? 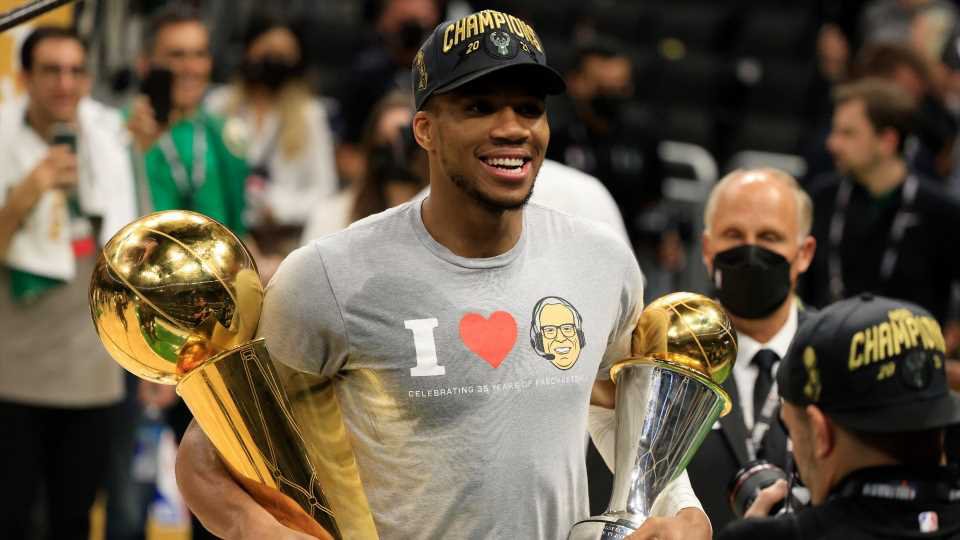 The 2021 NBA season fought many challenges, from the pandemic to the rash of injuries to star players and more, but the Milwaukee Bucks’ victory was a winning finish.

The odds for winning next year’s title, of course, came out quickly on Wednesday. Neither the Bucks nor the Western Conference champion Phoenix Suns are forecast to win in 2022, but they’re solid contenders as a busy offseason begins.

As a side note, the victory was satisfying for those who enjoy teams’ success through building organically.

In the Eastern Conference, you had the Brooklyn Nets, a team of three superstars – assembled largely by those superstars – who couldn’t stay healthy and lacked a strong supporting cast, and the Bucks, whose only lottery pick (top 14 in recent NBA drafts) was Brook Lopez.

Everyone else on the roster was drafted after No. 14 – or was undrafted.

And don’t look for the Bucks to give up their crown easily. Here are the top 10 teams’ 2022 title odds from three leading online sportsbooks.

Odds to Win the 2022 NBA Championship

Where do the Milwaukee Bucks and Phoenix Suns land, in terms of value, on the list for NBA champs in 2022?

The Bucks, the consensus third choice after the Brooklyn Nets and Los Angeles Lakers, won’t be sneaking up on anyone.

Giannis Antetokounmpo, 26, is just now entering his prime and, after dropping a 50-piece on the Suns to close out the Finals, will enter the 2021-22 season as the game’s best player.

The extended playoff run also gave Bucks upper management a clean look at the improvements needed to push for a repeat.

The Bucks figure to be firmly in the title hunt.

The rising Phoenix Suns are perhaps seen as a team that had its path to the NBA Finals paved by opponents’ injuries. That point has merit, given that All-Stars Anthony Davis (Lakers), Jamal Murray (Nuggets) and Kawhi Leonard (Clippers) missed all or parts of their respective series against the Suns.

Therefore, the opening lines are not surprising, placing Phoenix in a tightly packed group of “after the Lakers” Western Conference contenders.

Chris Paul’s impending decision on whether to opt out of his $44 million salary for the coming season certainly will affect the team’s future.

If Paul does opt out, he could re-sign with Phoenix – or (pause while Suns fans take a deep breath) choose to join good friend LeBron James with the Lakers.

With a better option at backup center and another reliable scorer, the Suns – with Paul – would be a viable value at their current number.

Superstars picked to return to health and prominence in 2022

The Nets had the excuse for failing in 2021: injuries.

James Harden missed a big chunk of the late-season schedule and was clearly not 100 percent during the NBA playoffs. Kyrie Irving missed the pivotal games against the Bucks. And Kevin Durant couldn’t quite do it by himself (though he came very close).

It’s tough to win as a three-headed All-Star team when playing with only one healthy head.

Where futures betting is concerned, however, investors have to handicap the Nets’ chances based on equal health for all teams – and that lands the Nets at the top of the heap.

The organization saw what was missing (beyond the health concerns) and likely will find improvements among the changes executed during the offseason.

Brooklyn will be able to outscore everyone, every night, and could win 60 of their 82 games pretty easily. A worthy favorite.

The Lakers, without full health from Anthony Davis, had no idea as to their identity. LeBron James, if not over the hill is at the top for sure, couldn’t find the answers without Davis, and L.A. fell to Phoenix in Round 1.

The coming offseason moves loom large and, as mentioned above, could begin with Chris Paul.

If that happens, the point guard problem is solved – well, at least for the 2021-22 season, given the respective ages of Paul (37 next May) and James (37 this December).

That’s a small championship window, but these futures are paying off in about 11 months.

What lies in store for the rest of the top 10 in next year’s title odds?

Will the Clippers or Jazz take the next step?

The L.A. Clippers could well have been the Bucks’ NBA Finals opponent. But two-time NBA Finals MVP Kawhi Leonard went down in the second round against the Utah Jazz and missed the last eight games of the Clippers’ postseason journey. It is not certain that they would have beaten the inspired Suns with him, but his absence was a big reason they fell to the Suns in six.

Leonard controls his destiny this offseason, with options ranging from staying put to joining the free-agency market. We won’t even begin to guess what the notoriously secretive superstar is thinking.

The Golden State Warriors must have their key missing piece, Klay Thompson, return to full service this winter in order to summon the chemistry needed to make a return to the Finals.

The Utah Jazz will try to bring back 34-year-old point guard Mike Conley and, if successful, would remain among the favorites in the West.

The Denver Nuggets hope to have Jamal Murray rolling by next spring as the 2022 playoffs approach and, with reigning NBA MVP Nikola Jokic leading the way, make the top six Western Conference playoff spots extremely competitive.

The Dallas Mavericks need an offseason move or two if they are to move into that elite group of Western contenders but, with Luka Doncic entering a contract year, they certainly have the right leader in place.

Additions such as Lowry, Leonard, Bradley Beal or any number of worthy starters would likely do the trick.

The Philadelphia 76ers probably offer the most betting value as the market opened this week. Kyle Lowry makes an intriguing free-agent target, too.

If their troubling situation with Ben Simmons gets resolved, whether through a trade or serious shooting improvements, Joel Embiid and the Sixers could reach at least the Eastern Conference finals next season. And anything can happen at that point.

Are Bucks really two times better than the 76ers?

Just outside the top 10 lie the young, scrappy Atlanta Hawks, who played a furious few playoff series with a chip firmly attached to their collective shoulder.

At +3500, the Hawks are the best mid-longshot team on the board.

Finally, we shift from the hopeful to the hopeless. Early expectations see the following teams as likely to spend the 2021-22 season maneuvering for the best chances in the 2022 NBA Draft (per FanDuel):

At +25000 sit the Detroit Pistons (who look set to pick Cade Cunningham with the No. 1 overall pick in next Thursday’s draft), the Orlando Magic, Cleveland Cavaliers, Oklahoma City Thunder and Houston Rockets.