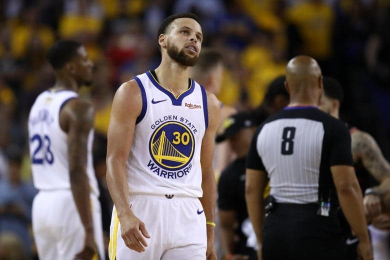 As Toronto Raptors are poised to deal a death blow to the Golden State Warriors’ Finals chances, should bettors still back the Dubs?

Game 3 of the NBA Finals was an upset in every sense imaginable. After dropping a disappointing Game 2 at home with their 109-104 loss to the Warriors, the Raptors battled back and bit a massive chunk of the will of the Warriors. Currently listed as -125 favorites, the Raptors have an implied 55-percent advantage over the Warriors, whereas the Warriors are listed as +105 dogs in most marketplaces.

For the first time in their history, the Golden State Warriors are underdogs in the NBA Finals.

Should they be, and if so, should Warriors backers panic?

No Durant, No Problem … No Klay, No Way?

Ok, forgive me for what’s probably the worst rhyme you’ve ever heard, but it illustrates a simple point: Klay Thompson is the ultimate X-factor in this series. While there has been lots of talk of Kevin Durant’s absence since his untimely calf injury in the Warriors’ series against the Houston Rockets, the Warriors have actually fared better as of late without their much-vaunted superstar and two-time Finals MVP.

The Warriors without Durant are 30-2, a 98-percent win rate, which in gambling terms, is absolutely absurd. While that is a relatively small sample size, it’s still an effective illustration of Durant’s value to the team. Sure he adds another element, but he is not what the betting public thinks he is, which is the sole factor to victory in the series.

Plain and simple, Durant’s absence isn’t troubling, but Klay Thompson? If the Warriors cannot get him back, their chances very well may be dashed. Again, while we’re also working with a very limited sample size, the Warriors are 6-11 in games where Klay Thompson hasn’t played since KD joined the Warriors.

Without homecourt advantage, and again, with both Klay Thompson and Kevin Durant’s injury statuses in question, it remains to be seen whether this team can return to form and regain their old lethal perception the Raptors rapidly rip away every semblance of confidence that they once had.

At +105, there is definitely some value if you expect KD to return, but if the Raptors take Game 4 and go up 3-1, they would successfully achieve what is effectively a true mathematical death blow as far as NBA history is concerned. Slightly less mentioned, Kevon Looney is also battling with an injury, and despite returning from a recent injury of his own, DeMarcus Cousins has not shown remotely the same level of athleticism or motor as he’s showed pre-injury.

Hard To Come Back

Historically, no team has ever been able to overcome a 3-1 deficit aside from the 2016 Cleveland Cavaliers, who coincidentally came back to beat the Warriors. But eerily similar to that series, this is a series that features significant absences in critical games.

Despite Klay being slated to play in Game 4, the line has effectively remained the same. It opened at 5.5 or 5 in most markets and presently sits at 4.5 with a total hung at 215, the highest total of the series thus far, showing a slight adjustment.

The total has gone over or pushed in every game of the series, and the underdog has gone 2-1 thus far, with the only favorite cover coming in Game 1 when Toronto played dominantly at home. At present, the Raptors are also clicking on all cylinders at just the right time.

With the Warriors looking wounded and an odd adjustment of the series prices, it does seem that the market movements show a potential Raptors upset, but ultimately, the series may very well be determined after the outcome of Game 4.