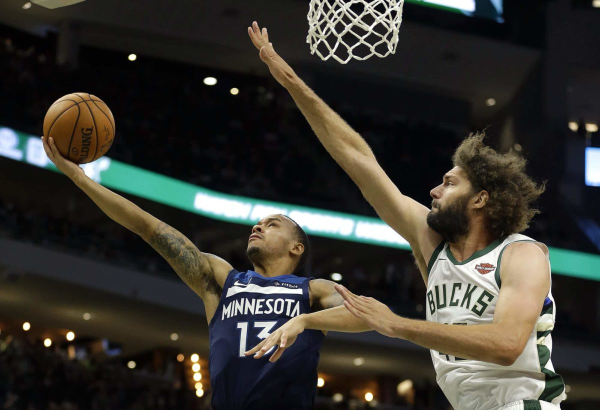 It’s a brand new decade, and there is no better way to kick off a new year than taking down a big GPP. NBA DFS provides us that opportunity Wednesday, and there is a short four-game slate to work with.

Pricing Wednesday is all over the place on different sites depending on how reactionary these sites were to Wizards and Timberwolves news, so make sure that you are getting value on the specific site you are playing.

Shabazz Napier is my favorite point guard play on the slate because of his situation Wednesday night. The Timberwolves are incredibly injured with Andrew Wiggins, Karl-Anthony Towns, and Jeff Teague likely being out, and Napier is very capable of turning into the go-to player that has elite point and assist upside.

In the last game without Wiggins and Towns, Napier played 29 minutes in regulation, but that was with 20 minutes from Teague as well.

There is no one else on the Timberwolves that even wants the ball, and Napier will be very willing to be the guy for the time being. I know that I will get 30-plus minutes, 15-plus shots and at least 10 potential assists, and it’s something that I can’t pass up in this spot.

While Devin Booker is not in a great spot against a tough Lakers defense, he is an elite scorer, and he has started to increase his usage recently alongside Ricky Rubio. This is all I needed to see when looking to get back on board with Booker as an elite fantasy option.

Against a tough defense, I expect a lot of looks for Booker as the rest of the Suns struggle to get open.

I love Jarrett Culver alongside Napier on this small slate because I expect him to operate as the second option on offense behind Napier, and we know that the coaching staff wants Culver to play a lot of minutes. Culver played a lot of point guard in college, and he is capable of being the primary ball-handler with Napier off of the court.

Culver took 21 shots in 38 minutes in an overtime game in Minnesota’s last outing, and that was with Teague playing 20 minutes. I expect Culver to get more touches in this game and that should only lead to more fantasy production at a cheap price all over the industry.

Julius Randle is a fantastic option if you are looking to spend up without breaking the bank at power forward on most sites. Randle has really picked up his play in the last three games, and we know that he is capable of doing this when given the opportunity.

This season, Randle has struggled to find a rhythm at times, but he is still the same player that had 60-plus-point upside on the Pelicans last season. If Randle continues to get this usage, I expect 45-plus fantasy points becoming the norm instead of the outlier as it has been most of this season for Randle.

Hassan Whiteside is on an absolute tear over the last month or so, and this spot should not scare us at all. Whiteside is averaging 1.4 FPPM this season, and he is now playing 34 to 38 minutes a night barring foul trouble, making this a no-brainer regardless of matchup.

To sweeten the pot a bit, let’s look at the last time Whiteside faced the Knicks. Whiteside had 50 fantasy points in just 26 minutes. I expect Whiteside to play 35ish minutes Wednesday night, and I would be more than happy with 50 in 10 extra minutes. The upside and floor here are undeniable.