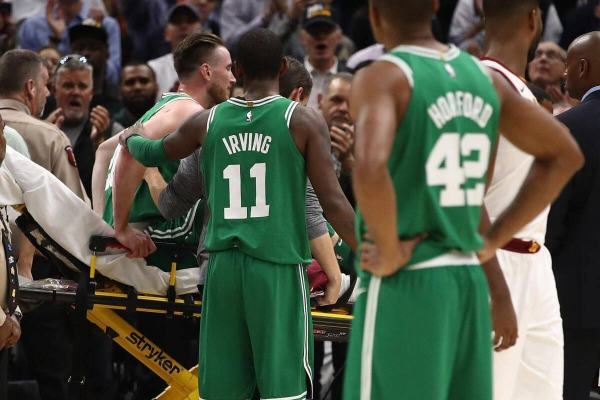 The Boston Celtics are in the Bay area to take on Stephen Curry and the Golden State Warriors in Oracle Arena tonight on TNT. The Celtics are in all sorts of turmoil with multiple comments from Kyrie Irving and others that indicate that the locker room is not on the same page at all. A lot of this blame is being placed on Kyrie, as he is often considered somewhat moody and arrogant. The rest of the Celtics know that they got to game 7 vs. LeBron James last year without Kyrie, so I think there is a little resentment there. These issues have led the Celtics to a 1-4 record in their last 5 games, including losses to the Rockets, Blazers, and Bulls. The Warriors have also been a little off recently, with losses to the Magic, Heat, and Rockets all within their last 5 games. The Celtics are expected to be at full strength for this game, while the Warriors will be without Klay Thompson again.

Boston Looking to Pick it Up

The Celtics are a very strange team and I think it is a reason for their struggles to a degree. The Celtics have Kyrie Irving, who seems to be clashing heads with some of the guys on the team, but is clearly their best offensive player. After that, they have a bunch of good players. Al Horford, Marcus Smart, Jayson Tatum, Marcus Morris, Jaylen Brown, and TerryRozier all classify as “good players.” They would all have roles on every team in the league, which always nice to have. The issue I have is that none of these good players constantly throw up “good” stats on a nightly basis. Absolutely no one know how many points any of these guys are going to score on a nightly basis and I think this is a concern.

The Warriors have similar issue at times, but they are not a prominent. They have multiple great players that have fluctuating games based on who shoots better on a given night. The difference is that I know Steph and KD are giving me 20 points, I just don’t know if it will be 22 or 41. This lack of true second and third options for the Celtics has caused bad games where none of the 7 get going because they don’t get the shots. I believe that this is a crux of the problem, but I have no idea when they will fix it. I think that the best way to fix it is get Gordon Hayward right because he is the second best option if he is fully healthy. I don’t think this will happen, so we need to see Tatum and Horford step up and take on a bigger role.

The Warriors are still adjusting to life with Boogie. I think that Boogie will create more good than bad in most situations, even though the defense could be a problem at times. Cousins is a solid post-defender who is a huge body to deal with on both sides of the court. I think Cousins will be an upgrade for most of the game over other bigs the Warriors have used recently. The only issue is the small ball lineups. It will be very interesting to see how Kerr decides to implement Cousins down the stretch of big playoff games.

I expect this game to be very interesting from the jump because the Celtics should be very hungry for a win. They have been the center of attention for a while now and I think they would LOVE to shut up the media with a win AT the defending champions place. The good news for the chemistry issues is that these are the games that Kyrie Irving lives for, especially without KlayThompson around to hound him all game. I expect Kyrie to have a big game and attempt to get the Celtics on the right track. The line on this game is 7.5 in favor of the Warriors, which I think is a little too big for me. The Warriors haven’t been locking up very many big wins recently and the Celtics are a tough matchup for them. I’ll take the Celtics +7.5 in this one.