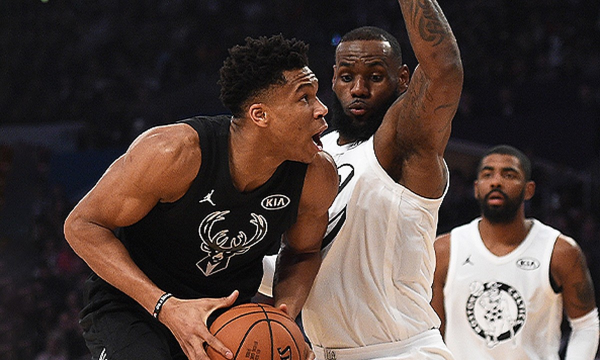 Sunday night will feature some of the best players in the NBA as the 2020 All-Star Game is set to tip off from the United Center in Chicago. For the second year in a row, the game will feature teams drafted by their team captains, LeBron James and Giannis Antetokounmpo.

For Antetokounmpo, he will be trying to avenge his loss from last year, where Team LeBron won 178-164. Still, on paper Team LeBron looks stronger than ever and will look to win for the second year in a row on Sunday. Tipoff for this one is scheduled for 8 pm ET.

This year, the game will hold a special tribute to the recently departed Kobe Bryant. Team LeBron will be wearing the number 2 in honor of Bryant’s daughter, Gianna. Team Giannis will wear number 24 in honor of Bryant himself. In addition to the jersey numbers, both teams will have tribute patches on their jerseys, and even part of the game itself is inspired by Kobe.

In fact, this game as a whole is going to look a little different than in years past. The first three quarters will basically be played one quarter at a time with the score resetting after each quarter. The winner of each quarter will earn $100,000 to be donated to a Chicago-based charity of their choosing.

If any of those quarters end in a tie, the money will be carried over to the next quarter. At the end of the three quarters, all of the points from each quarter will be added back to the team’s scores, but the clock will be turned off.

Instead, to win the game, each team must hit the target score, which is the higher score plus 24 (in honor of Kobe). For instance, if at the end of three quarters, Team LeBron has 100 and Team Giannis has 90, it will be the first team to 124 that wins (LeBron’s 100 plus 24).

Team LeBron comes into this one as five-point favorites for the All-Star Game. The over/under on total points scored is set at 303.

Both of these teams are stacked, but there is something really impressive about what LeBron James has put together, especially given the health of Luka Doncic. His starting five looks like this;

While Team LeBron looks strong, that doesn’t mean that Team Giannis is weak. His starting lineup consists of:

The big thing to remember about All-Star games is they are an exhibition, and usually, that exhibition is based around offense as opposed to defense. For instance, in last season’s All-Star Game, the only quarter where there was not a combined 80 points between the two teams was the fourth quarter, and even that quarter, the combined scoring was 79.

So, when looking at the scoring, it is hard not to like Team LeBron. They have the leading scorer, and while yes, Team Giannis has the next two highest scorers in the NBA this season in Giannis and Trae Young, there is a little less scoring built into Giannis’ roster as a whole. For my money, I am going with Team LeBron to win it for the second year in a row and cover the five-point spread.

In terms of the over/under, I like the over, but more cautious in betting it. Remember, the last quarter will be just to a target score of 24 more points than the highest scorer, so the fourth quarter is going to see dramatically less scoring than in year’s past. That is not to say that the 303 number is unattainable, but it does become a bit more challenging.