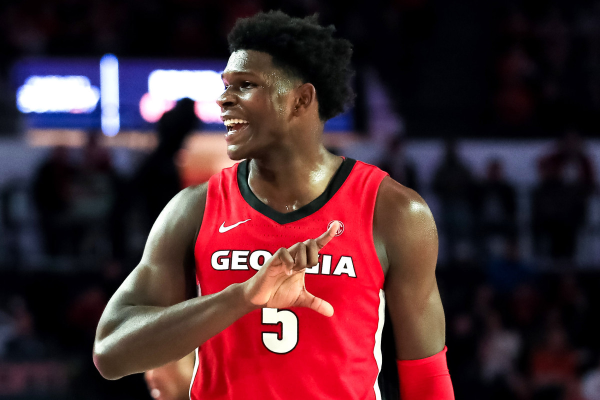 There was plenty of hype surrounding Thursday’s NBA Draft Lottery, which could eventually change the history of one of these franchises. It was the Minnesota Timberwolves lucking out with the ping pong ball that gave them the first pick in the upcoming draft.

This is a major moment for a team is looking to keep Karl-Anthony Towns and D’Angelo Russell happy for the foreseeable future. Minnesota had some bright moments last season, but not enough. After all, there’s a reason they’re in a position to make the first pick.

“There’s a lot of steps left in this journey for us, but today was a significant one,” Timberwolves president of basketball operations Gersson Rosas said. “We’re excited about the potential level of player that we can add to our organization, but at the same time, we are going to be very aggressive and look at every avenue to improve this team.

Building Something in Minnesota

We have two young stars in Karl-Anthony Towns and D’Angelo Russell that we’re building this together [with]. We’ve got a great young core that’s young and being one of the youngest, if not the youngest, team in the NBA. We have a lot of upside. But this allows us to take a major step in talent acquisition, whether it’s in the draft or the trade market, whatever the case may be. It really positions us well moving forward.”

In fact, Russell was the one who represented the Timberwolves for the lottery.

“That’s why we brought D’Angelo here,” Rosas said. “He’s one of the faces of our organization, and he’s a closer, as he showed tonight. We’re excited.

“This is what it’s all about. We’re building this the right way, step by step. We want to make sure we do things the right way, and the opportunity… you want to be in a situation where hard work meets opportunity and you catch a break like this, and that’s where we are at tonight.”

Ironically, the Timberwolves beat out the Golden State Warriors, which received the second pick. A few months ago, the two teams had a major trade, which landed Russell in Minnesota and former No. 1 overall pick Andrew Wiggins to Golden State.

The Warriors had their own bout of good luck, considering a five-year NBA Finals run was snapped this season, and now the No. 2 pick lands in their laps. Stephen Curry, Klay Thompson, Draymond Green, and Wiggins are already a nice nucleus, but some moves can occur.

To Trade, or Not to Trade

“I know there’s a lot of narrative around us trading and what we’re going to do with it, but we don’t really know anything at this point,” Warriors president of basketball operations Bob Myers said. “We found out half an hour ago that we had the No. 2 pick, so that’s the first step as far as getting some clarity. And now it will be, ‘Do we like somebody there?’ We don’t entirely control the draft, but all you got to like is two guys to be happy, so that makes it a little simpler.

“But I have no idea what the value is of that pick, how much people covet it, and I don’t think I’ll know that anytime soon. That’s something that might play out over the next couple months. But usually the No. 2 pick is pretty good, so I imagine either we’ll be happy — I think we’ll be happy with whatever options, whatever route we take, we’ll be pretty happy about it.”

Among the top-rated prospects in this year’s draft are LaMelo Ball, Anthony Edwards, and James Wiseman. The 2020 NBA Draft takes place much later this year on October 16. FanDuel Sportsbook has Edwards (-110) as the odds-on favorite to be the No. 1 pick while Wiseman (+200) and Ball (+300) are a close second and third.