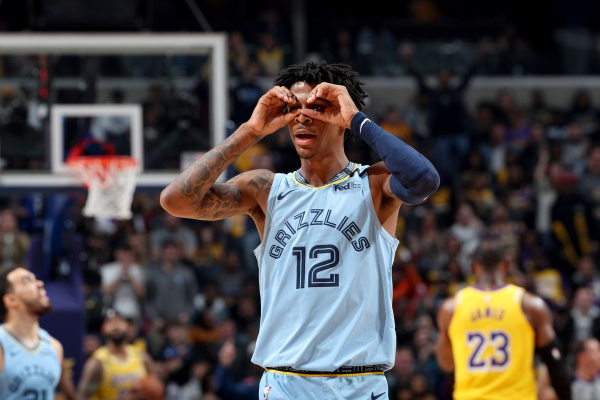 With the seeding portion of the NBA schedule coming to a close, Thursday night will feature a battle of East versus West as the Milwaukee Bucks (56-16) will take on the Memphis Grizzlies (33-39) at the Visa Athletic Center. Tipoff for this one is scheduled for 4:00 pm ET.

These two teams couldn’t be any more different, though, as the Bucks come into this one having already wrapped up the Eastern Conference as they have a four-game lead over the second-place Toronto Raptors. In their last game, on Tuesday, the Bucks beat the Washington Wizards 126-113.

During the game, though, Giannis Antetokounmpo was ejected after headbutting Washington Wizards center Moritz Wagner. As a result of the incident, Antetokounmpo was suspended one game and will not be suiting up for this one.

The Grizzlies came to the season restart as the 8 seed with a 3.5 game lead. A 1-5 record since though has Memphis scrambling. Even so, if the Grizzlies can beat Milwaukee, they’ll make the play-in game, so the stakes are high on Thursday.

On offense, Milwaukee has been the best scoring team in the league. They sit atop the rankings averaging 118.8 points per game (half a point higher than the Houston Rockets). For the Grizzlies, they come in 13th overall averaging 112.5 points per game.

Milwaukee To Be Without Star

As previously mentioned, Antetokounmpo will be sitting this one out due to his suspension. That is a lot of offensive firepower missing from the Milwaukee arsenal. This season, Antetokounmpo has averaged 29.5 points per game on 55.3% shooting. He is also averaging 13.6 rebounds and 5.6 assists per game.

In reality, though, the Bucks may have rested Giannis anyway. With the Eastern Conference wrapped up, Milwaukee is focused on being at full strength for the playoffs. Khris Middleton (21 points, 6.2 rebounds, 4.3 assists) and Eric Bledsoe (15.1 points, 4.7 rebounds, 5.4 assists) could sit against Memphis.

Memphis In A Do Or Die Game

There is nothing better than excitement on the final days of the regular season. In the Western Conference, four teams are vying for a postseason berth. If Memphis and Portland win they are in the play-in game for the 8th seed. San Antonio and Phoenix need to win and get some help to make the playoffs. Regardless, it will make for a wild ride as two teams hope to stay in the NBA bubble at Disney World while two will be going home.

Memphis will need big games from their stars on Thursday. This season, two of their biggest contributors have been guard Ja Morant and forward Jaren Jackson Jr. Morant is averaging 17.9 points, 3.7 rebounds, and 7.2 assists in 66 games this season. Jackson, on the other hand, is averaging 17.4 points and 4.6 rebounds. Look for these two to lead the way against the depleted Bucks’ starting lineup.

Another major piece for the Grizzlies is center Jonas Valanciunas. In 69 games, he has averaged 14.8 points on 58.3% shooting. He is also averaging 11.1 rebounds per game.

Most nights, this would be an easy decision for me as the Bucks have been the best team in the league. On this night, I am taking Memphis. First of all, they have something to play for as they need this win to continue while the Bucks are coasting into the postseason.

Furthermore, the Grizzlies get the Bucks at a disadvantage. Antetokounmpo is suspended, and even if the other starters play, it will likely be reduced minutes. For my money, I am taking the Grizzlies in this one.