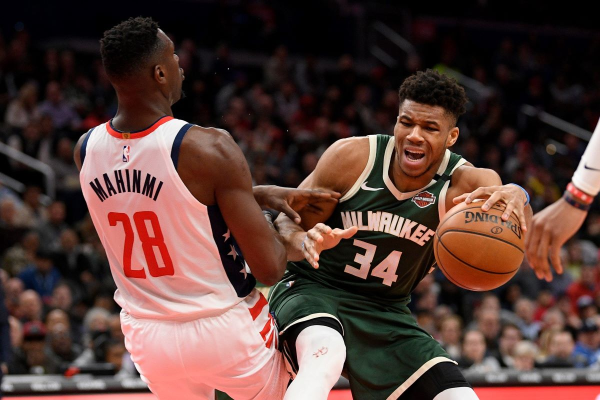 Tuesday night features a battle of the two top teams in the Eastern Conference as the Milwaukee Bucks (49-8) travel to the Scotiabank Arena to take on the Toronto Raptors (42-15). As it currently stands, the Bucks sit a comfortable seven games ahead of the Toronto Raptors.

But in what could be a preview of an Eastern Conference finals matchup, both teams will be out to make a statement. Tipoff for this one is scheduled for 7:30 pm ET.

For the Milwaukee Bucks, they come into this one having won nine of their last 11 games. Despite that, this will be the second game of a back-to-back as they beat the Wizards on the road Monday night in overtime 137-134.

While the Bucks hold a sizeable lead in the conference, they would still love to create even more separation between them and the Raptors while also showing they can beat the Raptors on their home court. Given that the Bucks are 23-5 on the season on the road, there shouldn’t be too much concern in that regard.

The Toronto Raptors come into this one equally as dominant, having won 17 of their last 18 games. Their only loss in that span was a 101-91 loss to the Brooklyn Nets on the road right before the All-Star break.

They will look to continue their winning ways and inch a little closer to the top spot in the East as they welcome the Bucks into town.

The Milwaukee Bucks come into this one as 1.5-point favorites despite playing on the road. The over/under for total points scored sits at 231.

On the defensive side, it is the Toronto Raptors that hold the advantage. They currently rank 2nd in the NBA in scoring defense, allowing just 106.1 points per game to opponents (107.5 at home). For the Bucks, they are also in the top 10 as they rank sixth, allowing 107.3 points per game (106.6 on the road).

Milwaukee knows that it is the best team in the Eastern Conference this year, but they would still love to add that extra layer of confidence by winning on the road at Toronto. To do so, they will be led by their superstar Giannis Antetokounmpo.

On the season, the “Greek Freak” is averaging 30 points, 13.6 rebounds, 5.8 assists, 1.1 steals, and 1.1 blocks per game. He is playing at an MVP level this season and creates a matchup nightmare regardless the opponent.

Aside from Antetokounmpo, Khris Middleton is also having an electric season. He is averaging 20.7 points, 6.2 rebounds and 4.2 assists per game. His ability to extend the floor helps take some of the pressure off of Giannis.

Other major contributors include Eric Bledsoe (15.7 points, 4.7 rebounds, 5.4 assists) and Brook Lopez (10.7 points, 4.5 rebounds, 1.7 assists, 2.5 blocks). It is worth noting that Lopez is questionable with a sore lower back and did not play Monday night.

When the Raptors were not able to retain Kawhi Leonard this past offseason, many thought that they would take a major step back in the East. The emergence of Pascal Siakam as a bonafide All-Star has people forgetting that notion.

On the season, Siakam is averaging 23.7 points, 7.5 rebounds, 3.4 assists and one steal per game. In his last game, he went for just 21 points, but the game before that, he dropped 37 points while adding 12 rebounds. He will need to play to that level to help the Raptors topple the Bucks.

Taking The Raptors And The Points

For me, this one comes down to the idea of rest. With the Raptors having the day off Monday and the Bucks coming into a back-to-back, Milwaukee is certainly at a disadvantage in this one.

It still wouldn’t shock me if the “Greek Freak” is able to keep the Bucks in this one, but knowing the difference in rest, I am more inclined to take the Raptors at home being spotted the 1.5 points. For my money, I am taking Toronto.