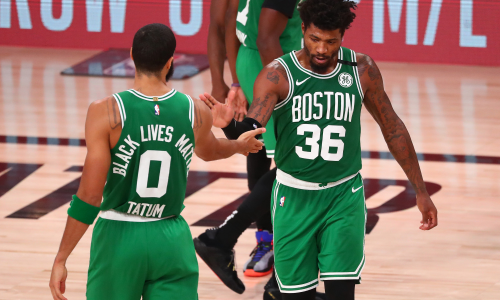 December 23 will see a heavyweight matchup between two of the Eastern Conference’s most potent teams as the almost-there Bucks take on the Celtics to kickoff the 2020-2021 season. Despite long layoffs and indefinite postponements, the NBA regular season is back – and both of these teams will look to get their title chase off to a great start with a win on Wednesday.

The Bucks: Failing Where it Matters

Giannis Antetokoumpo’s Bucks had something of a disappointing 2019-2020 campaign. Many high-profile league pundits and analysts tipped the Bucks as the favorites to win it all (even above LeBron’s Lakers and Kawhi’s Clippers). However, the franchise’s season ended abruptly following a 4-1 gentleman’s sweep in the Eastern Conference semifinals series at the hands of a better organized Miami Heat team.

Granted, Giannis was felled by a severe right ankle injury in game 3 of that series, and that turn of events deeply affected the Bucks on both offense and defense. But by that point, the Miami Heat – led by a motivated Jimmy Butler – had already laid the groundwork for a sweep as they held a 2-0 lead from the previous two games.

Thus, the Bucks season – which saw the franchise stack up a league-best regular-season record of 56-17 – ended decisively at the hands of the heat. This proved the continuation of a similar trend in the past for playoff-bound seasons in a row. Last year, the Bucks were discharged in a very similar fashion by a Kawhi Leonard-led Raptors team, and by the Celtics a year before that.

The Celtics: The Eastern Conference Juggernaut on a Rebuild

After trading the apparently troublesome Kyrie Irving to the Nets before the 2019-20 campaign, the Celtics are doubling down on their rebuild. Over this past off-season, the franchise shipped the injury-prone Gordon Hayward to the Charlotte Hornets and Enes Kanter to the Trailblazers.

Importantly, these trades helped the Celtics free up their books, acquire a cheaper talent like Tristan Thompson, whose play aligns better with the franchise’s goals, and offer improved contracts to key players like Jayson Tatum and Jalen Brown.

These trades were necessitated by a faltering campaign last season. Although the Celtics made a deep playoff run following their 48-24 regular-season record, they bowed out at the Eastern Conference finals to a Heat team fresh off a convincing sweep of the Milwaukee Bucks.

Despite being the first game for both teams in the upcoming regular season, there are bragging right up for grabs for whichever team wins this content. Both these teams are motivated to make a deep playoff run or even win it all.

If the preseason games are any indication, both these teams are rusty. The Bucks have lost all three, including twice to the Mavericks and once to the pelicans. For their part, the Celtics have lost both of their preseason openers to the 76ers and Nets, respectively.

The Celtics is naturally a high-scoring team (averaging 113.7 points per game). If they can capitalize on their penchant for turnovers and fast-break points, they might have a shot at winning. However, it’s difficult to see as the Bucks have a fully fit squad (with Giannis fired up), and the Celtics are a little shorthanded, as star point guard Kemba Walker is out with a left knee injury.

The Bucks, for all of their playoff struggles, are built to win these kinds of games. I don’t think the Celtics have enough in them to prevent the Bucks from emerging victorious in this contest.

Pick: Take the Bucks on the moneyline and the spread.