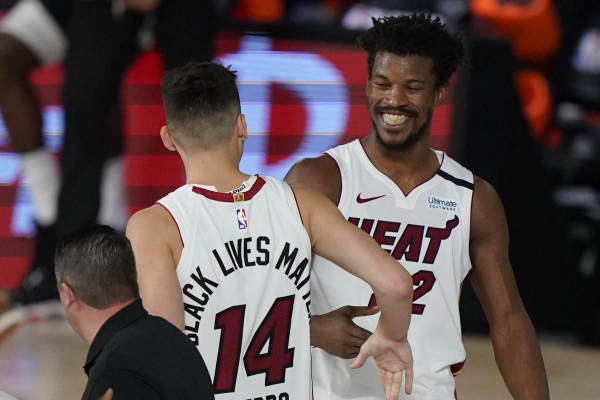 The long and winding road that is the 2019-20 NBA season is at the finish line. Wednesday night, the Los Angeles Lakers will begin their quest for their 17th championship in franchise history, one that would tie them with the Celtics for the most in the NBA. Meanwhile, the Miami Heat will look to finish their Cinderella run to the Finals with their fourth NBA championship.

Here is a preview of Game 1 of the Finals between the Heat and Lakers. Los Angeles is a big favorite everywhere you look, listed as a 4.5-point favorite on FanDuel Sportsbook.

Entering the bubble as the five-seed in the Eastern Conference, the Heat made quick work of the Pacers, dispatching them in a four-game sweep. In the second round, Miami took on and defeated the Bucks, the conference’s top seed and owners of the best record in basketball, in a five-game series. Then in the Eastern Conference Finals, they managed to come out on top in six games against a good Celtics team.

Miami is a team that boasts a pair of All-Stars along with a bevy of role players. Jimmy Butler and Bam Adebayo have each had big games this postseason and will be players to watch. Butler, the ninth-year man out of Marquette, averaged 20 points during the regular season and has solid in the playoffs, with the highlight being his 40-point performance in Game 1 against Milwaukee.

As for Adebayo, the big man became a star in his third season, averaging 16 and 10 while being a force on the defensive end. Bam was magnificent against Boston, delivering a game-saving block on an attempted dunk by Jayson Tatum earlier in the series before scoring a team-high 32 points in the series-clinching Game 6

The other role players for the Heat have each had big games as well. Tyler Herro’s Game 4 performance against the Celtics will go down as one of the greatest playoffs games ever as a rookie, as the sharp-shooter scored 37 points on 14-of-21 shooting. Veteran point guard Goran Dragic has been a steady source of offense all postseason, scoring 20+ points in 10 of Miami’s 15 playoff games. Duncan Robinson and Jae Crowder are two others to watch, especially from beyond the arc.

The Lakers returned to greatness in a big way this season after missing the playoffs in each of the previous six seasons. L.A. finished as the one-seed in the West, taking care of the eight-seed Trail Blazers in five games in the first round of the playoffs.

Next, they had a matchup with the Rockets, who, just like Portland, won Game 1 before the Lakers won four in a row to move on to the conference final. There, they overcame a surprising Nuggets team to win in five yet again.

When it comes to the Lakers, their success will be on the shoulders of their two superstars; LeBron James and Anthony Davis. First, James, who is now playing in his 10th NBA Finals. The King made up for last year’s disappointing first year in Los Angeles by averaging 25 points and a league-high 10 assists, finishing second in MVP voting. It’s been another good postseason for James, highlighted by his masterful Game 6 versus Denver in which he scored 38 points to go along with 16 boards and 10 assists. And yet, Davis has arguably been better.

In his first year in L.A., Davis averaged 26 points and nine rebounds but has surpassed those numbers throughout the postseason. He has scored 30 or more six times this postseason, three of them coming in the last series, while also hitting shots like his game-winner against Denver in Game 2.

But a big reason L.A. is favored as big as they are in this series is the solid performance of their role players. An example of that is Kentavious Caldwell-Pope, who up until the last game had six straight outings of double-digit scoring and has generally become one of their most consistent outside shooters. Speaking of outside shooting, Danny Green has seemed to find his touch from deep once again, as the veteran will look to add another ring after being on title teams in Toronto and San Antonio.

Dwight Howard and Ramon Rondo have each elevated their play as well, with Howard getting a double-double in 22 minutes of action in Game 4 against the Nuggets and Rondo making big plays on both ends. Alex Caruso and Kyle Kuzma are the two youngest Lakers in the rotation, but each have also provided a spark when they see the court.

Game 1 with these two teams will be a ton of fun. The Heat are the lowest seed in over 20 years to reach the Finals, but wear down teams with strong defense and clutch three-point shooting. Meanwhile, the Lakers have the two best players in this series, with a good combination of size and shooting ability to go up against anyone.

Based on what we have seen this postseason, the Lakers tend to start slow in a playoff series. The opposite is true for the Heat, who have won each of their Game 1s this postseason. While I believe L.A. will ultimately win the series, Miami will play with an urgency to avoid going down early in the series. I expect a close game, but one that the Heat find a way to win.