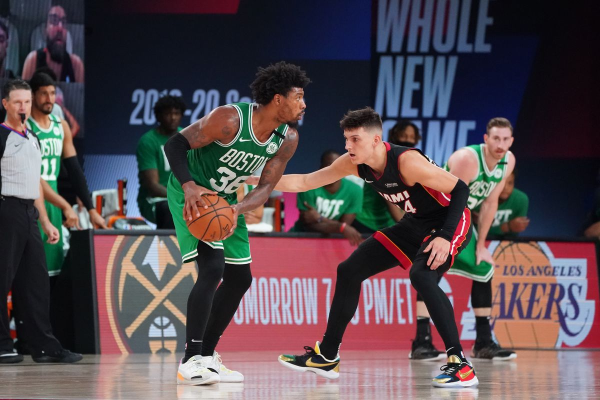 After defying the odds to lead the Boston Celtics 3-1, the Miami Heat have the chance to close out the series if they can secure a victory in Game 5. Tip Off is 8:30PM ET at the AdventHealth Arena.

In Game 1, The Heat went one up with a narrow overtime victory. Goran Dragic’s 29 points and Jimmy Butler’s 20 was enough to edge out the Celtics despite a defiant performance my Jayson Tatum who recorded 30 points, 14 rebounds and 5 assists. A great block by Bam Adebayo in the final moments proved to be the play of the game, shutting out Tatum as he looked to add to his 30 points to secure the win.

Bam Adebayo kept the momentum going into Game 2 with 21 points, 10 rebounds and 4 assists. Dragic was on fire again adding another 25 points that would help Miami beat the Celtics by 5 points. With their combined effort, the Heat moved on to control the series at 2-0.

At game 3, we saw the Boston Celtics close out the W with a 117-106 win. Jayson Tatum was red hot once again with 25 points as was Jaylen Brown with 26 points. Despite a late rally by the Heat in the 4th quarter, the Celtics were able to get the job done.

It was the Tyler Herro show in Game 4. The rookie scored a career-high 37 points to inspire the Miami Heat to a narrow 112-109 win and a 3-1 series lead. Herro was supported well by Butler who tallied 24 points while Jayson Tatum was the Celtics highest scorer after catching alight in the second half with 28 points.

Despite being underdogs throughout the series, Miami Heat have been very impressive. It appears that playing in the bubble without fans has affected the Heat less than it has the Celtics. In the regular season the Celtics perform much better on the road compared to the Heat, winning 61.1% of games compared to 40.5% for the heat.

With home advantage not being a factor in the playoffs, the Heat have a win rate of 83.3% in the playoffs compared to the Celtic’s 64.3%. If this trend continues we can expect the Heat to close out the series in Game 5 who seem to have dealt with the exceptional circumstances of this years playoffs better than their opponents.

Can Tyler be the Herro Again?

After finding form at the perfect moment, Tyler Herro could be the match winner again. If he can replicate his Game 4 form, Miami will be confident that they can secure the series in Game 5. Despite his age, Herro appears to be a player for the big occasion and could well be set to perform in the biggest game of his career so far.

Right now the Miami Heat have an in-form squad, with at least 5 players who can stand-out on any given night. With the likes of Jae Crowder and Duncan Robinson playing important secondary roles, the Heat have both offensive talent and team balance. It’s as if even though the Celtics have an incredibly talented squad, they haven’t showed their full potential so far this series.

That being said, they are a team that could spring into life at any moment with the talent they have in their team. If Kemba Walker can support the scoring efforts of Jayson Tatum and Jaylen Brown, the Celtics are easily capable of extending the series. The Celtics also need Gordon Hayward to step up in Game 5. After a devastating performance in Game 4 with only 14 points, he’s looking to replicate his impressive display in Game 3 which tipped the balance in Boston’s favour and helped them to their first victory of the series.

As they have been all series, the Celtics are favorites on the Money Line: -146 compared to the Heat: +124. The Spread prices the Miami Heat: +3/-110 and the Boston Celtics: -3/-110. This means that while your money would be “safer” with the Celtics, you can’t discount the Heat’s perseverance.

The bet for over/under on Fanduel for Game 5 is 212.5. If the last two games are anything to go by (Game 3: 223, Game 4: 221) , then you’d expect this one to be over 212.5. However, with so much on the line in Game 5, expect these teams to place a premium on defense. Since the Miami Heat look to close out the series and the Boston Celtics try to stay alive there’s a good chance this will be a tight and low scoring game.

There’s plenty of value to offer as we head into Game 5 of the Eastern Conference Finals. On the Money Line the Heat offer the best value given the way they have performed so far, I expect them to close out the series in Game 5 with a number of players displaying excellent form at exactly the right time.