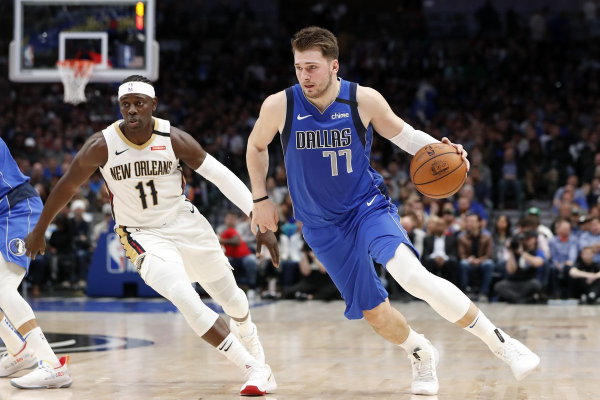 There’s no denying that Zion Williamson is the real deal. The Pelicans are a different team with the rookie on the floor, but are they a playoff team?

Regarding that question, Wednesday night provided a great test as New Orleans went into Dallas to take on Luka Doncic and the Mavericks. This game marked the first time Williamson and Doncic have faced off, and it proved to be a big night for both men.

For Williamson, the contest offered the 19-year-old a chance to complete his first back-to-back. While he admitted to having a slow start and needing to “wake up” in the first half, Williamson managed to pick up the pace on his way to playing a season-high 35 minutes.

After beginning with strict minutes restrictions for their young star, the Pelicans are now letting Williamson loose. When asked about Williamson’s conditioning, coach Alvin Gentry said, “We worry about him too freakin’ much, OK? He’s fine. He’s 19 years old. He’ll be fine.”

For Doncic, this was a record-breaking night, as the 21-year-old earned his 22nd career triple-double, breaking the franchise record set by Jason Kidd. Doncic finished with 30 points, 17 rebounds, and 10 assists.

The Mavericks needed just about every bit of Doncic’s performance as they edged out the Pelicans by a score of 127-123 in overtime.

With the two Los Angeles clubs occupying the top two seeds in the Western Conference, Dallas will be eager to climb ahead of their current position, where they sit seventh. If the playoffs were to begin tomorrow, the Mavericks would take on the Kawhi Leonard, Paul George, and the Clippers in the first round.

At 38-25, Dallas is well ahead of eighth-seeded Memphis, who owns a record of 31-31. Thanks to a win over New Orleans, the Mavericks can now set their sights on 38-24 Oklahoma City, who occupy the sixth seed.

Meanwhile, the Pelicans are hoping that their young cast can power them to a strong finish and sneak into the playoffs. That task is becoming a more difficult one, as the top eight continue putting more space between themselves and the teams giving chase.

At 26-36, New Orleans will need to go on an impressive run if they’ll catch the Grizzlies with 20 games remaining. However, they’re not far back of the cluster of teams directly in front of them – Portland, Sacramento, and San Antonio – and surging ahead of those three could give the Pelicans an added boost in their hunt for the eighth seed.

Doncic began the year as a top MVP candidate. While he remains third on the list of favorites, his odds of +1600 put him well behind Giannis Antetokounmpo (-950) and LeBron James (+1000).

So, Doncic and the Mavs will instead be focused on doing damage in the postseason. Sure, Dallas occupies the seventh seed, but they also have a proven superstar in Doncic playing alongside a dangerous big man in Kristaps Porginzgis.

We all know the Lakers (+165) and Clippers (+190) are the two favorites to win the Western Conference, but how far back are the Mavericks? At +2100, Dallas owns the sixth-best odds of winning the conference.

The Pelicans are on a list of big longshots, so fans of the team may be more interested in seeing if Williamson can make a run at Rookie of the Year.

After missing the first half of the season, Williamson has closed the gap on Ja Morant, who owns the best odds of -300. Williamson is the only other player within shouting distance of Morant with odds of +198.

We’ll have to wait and see if Williamson’s 21-point performance against Dallas will close the gap even more.