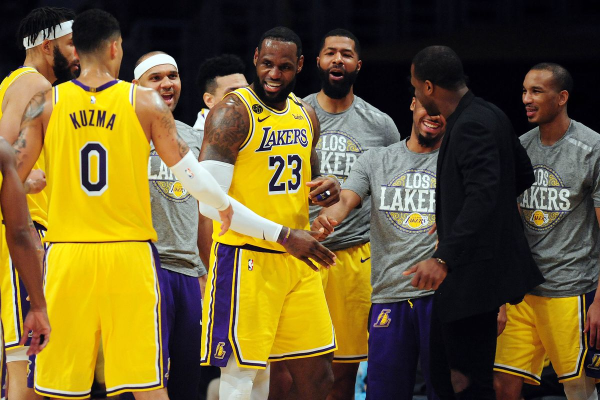 The Miami Heat would not allow the NBA Finals to be a sweep. Led by a legendary performance from Jimmy Butler in Game 3, Miami grabbed their first victory of the NBA Finals against the Los Angeles Lakers. Now on Tuesday night, a pivotal Game 4 approaches, one that has serious implications on the future of this exciting series.

Here is a preview for Tuesday night’s Game 4 matchup between the Lakers and Heat. Los Angeles is favored once again, but not by as much as the last two games. They are listed at -7.5 against the spread on FanDuel Sportsbook.

In the first matchup, the Lakers showed why they were the heavy title favorites. Thanks to Anthony Davis’ 34 points and 15 total threes made as a team, Los Angeles overcame an early deficit to crush Miami 116-98.

The Lakers, who trailed 23-10 in the first, out-scored the Heat 83-44 from the point before going into the fourth quarter. Miami, who was led by Butler’s 23 points, suffered a pair of injuries as well, with Bam Adebayo and Goran Dragic each leaving the game.

Playing without both of their injured starters, the Heat were over-matched in Game 2. LeBron James was the star this time, scoring 33 points with nine rebounds and nine assists, as the Lakers led throughout and secured the 124-114 win. Davis also significantly contributed with 32 points and 14 rebounds, while Rajon Rondo had 16 points and a team-high 10 assists.

Playing without Adebayo and Dragic, Butler did everything he could once again, leading the team with 25 points and 13 assists. But Kelly Olynyk stepped up in Bam’s absence, earning 24 points with nine rebounds, while the rookie Tyler Herro netted 17 points.

Then in Game 3, facing a potential three-game deficit, Butler played the game of his life. The veteran dropped 40 points, 13 assists, and 11 rebounds as Miami upset L.A. 115-104. Butler scored his 40 without even attempting a single three-pointer, instead, dominating in the post throughout the game.

Herro and Olynyk each had 17 as well, while Duncan Robinson sunk three triples as part of his 13 points, his best mark of the series. Los Angeles did find a way to come back on two separate occasions but fell short in the end. While James had 25 points and both Markieff Morris and Kyle Kuzma had 19, Davis had just 15 points on just six-for-nine shooting.

Los Angeles will win if they get more aggressive on defense and avoid the slow starts. In two of the three games this series, the Lakers got into an early double-digit hole in the first quarter. In Game 1, they came back thanks to phenomenal shooting from outside. But in Game 3, they pretty much played from behind for the entire game. The Lakers could use a fast start to force some pressure on the Heat.

As for the defensive point, Butler dominated in the post while facing one-on-one coverage almost exclusively. When he was double-teamed, he found the shooters like Herro and Robinson, who made the Lakers pay from outside.

Los Angeles will need to be more aggressive in forcing Miami to take contested shots, but also communicate better as a whole defensively. While the Lakers are still favored in this series, they have plenty of adjustments that need to be made.

Miami will win if they shut down Davis, and Butler can have a repeat performance. More or less, what happened in Game 3 will need to be replicated to a degree for the Heat to win two in a row. First off, Miami did an excellent job of taking Davis out early due to foul trouble.

But even when he was on the court, the Heat made things difficult with no easy buckets and attacking him at the rim. As a result, he scored just 15 points in 33 minutes and was a -26 on the floor. Miami should look to attack him early and often while forcing him to settle for contested jumpers on the other end.

Then there’s Butler. Through three games, he has been fantastic, topped by a 40-point triple-double in Game 3. His play-making has stood out, setting up his shooting bigs like Olynyk and Meyers Leonard to succeed in Adebayo’s absence.

Going back and looking at Game 3, the Heat played well and took advantage of Los Angeles’ mistakes. But the mistakes were uncharacteristic, like how the Lakers had more turnovers in the first quarter than they did in all of Game 2. A big part of that is the Lakers likely thinking they had the series in the bag, and as a result, played with less effort and urgency.

We’ve seen Portland, Houston, and Denver beat the Lakers comfortably in a game this postseason. However, Los Angeles has turned around and won by an average of 13 points following each of their postseason losses.

The chances of the Lakers selling their opponents short again and coming out with a lackadaisical effort seem rare, which has me going with the purple and gold to take Game 4 and move closer to an NBA title.