LeBron’s Triple-Double Too Much For Kyrie, Nets 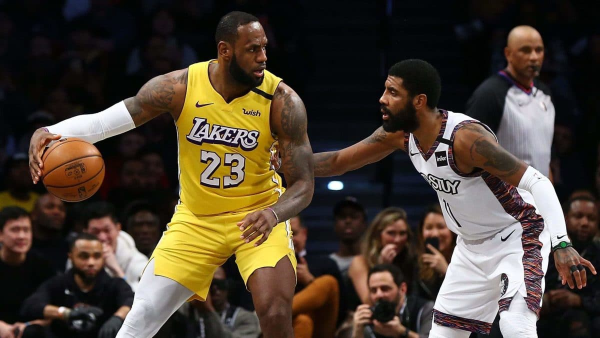 It’s been a few years since LeBron James and Kyrie Irving led the Cleveland Cavaliers back from a 3-1 deficit in the NBA Finals to shock the Golden State Warriors. On Thursday night, James and Irving were putting on a show as they battled one another.

James is well on his way to passing Kobe Bryant on the NBA’s career scoring list, and a big performance against the Nets in Brooklyn brought him to the brink. After putting up 27 points against his old teammate, James now needs just 17 to move into third all-time.

James’ 27 points were part of a triple-double that proved too much for the Nets to handle. In total, James’ 10th triple-double of the season included 27 points, 12 rebounds, and 10 assists.

Both Anthony Davis and Dwight Howard pitched in with double-doubles. While Davis was putting up 16 points and 11 rebounds, Howard was scoring 14 points and reeling in 12 rebounds.

Including James’ three made shots from beyond the arc, the Lakers sunk a season-high 19 three-pointers on their way to a 128-113 victory on the road.

Irving made a number of plays to keep his team in the game, but his 20 points weren’t enough as the Nets fell off in the second half.

Nets Hanging On To Eighth Seed

After an offseason of glamourous signings and excitement, Brooklyn has struggled all season long. With a record of 18-25 after falling to the Lakers on Thursday, the Nets currently own the eighth seed in the Eastern Conference and sit two games back of the Magic.

You don’t have to search terribly far if you’re looking for reasons why Brooklyn hasn’t found its rhythm this season.

First of all, the Nets entered the season knowing that their biggest free-agent signing, Kevin Durant, wouldn’t be available to play this year after suffering an Achilles injury at the end of last season.

Second, the team’s next-best player, Irving, has only been able to play 16 games this season.

If you count Durant as a would-be top scorer, Brooklyn hasn’t had three of its top four scorers for even half of its games so far this year. Caris LeVert, who’s averaging 14.9 points per game, has only played in 18 contests.

Now, the Nets will try to fend off 17-28 Detroit, 17-29 Chicago, and 15-29 Washington, all of whom sit fewer than four games behind Brooklyn in the standings.

After a year in which James struggled with injuries and the team struggled as a whole, this season’s Lakers look like a well-oiled machine led by the James of old.

If this Los Angeles team is able to get a victory over Philadelphia on Saturday, the Lakers will begin building upon another three-game winning streak. Currently, the Lakers have won two in a row and 12 of their last 14 games.

James’ leadership is a big reason why the Lakers are in pole position in the Western Conference, as he’s been able to average 25.2 points, 10.8 assists, and 7.7 rebounds per game while playing 43 games.

Now, the Lakers have moved level with the Bucks as favorites to win the NBA Finals, but they’re not alone. Both of the Los Angeles clubs and Milwaukee all own odds of +320 to win it all.

With odds of +1200, Houston and Philadelphia follow that trio of favorites.